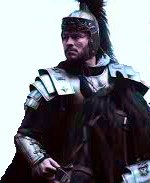 Saint Gordius, who was born in the third century, followed the military profession, and obtained the rank of centurion, or captain. Saint Basil the Great, who wrote a homily in praise of this saint, relates that at the time of his martyrdom there was a great persecution of the Christians at Caesara; in the public squares idols of wood and stone were exposed, and those who refused to sacrifice to them were tortured and put to death. The consternation of the faithful was very great, for their houses were, with impunity, sacked by the idolaters, the prisons filled with Christians, and while the churches were deserted, the woods and mountains were peopled with the fugitives.

Hereupon Saint Gordius renounced his profession, laid aside the military insignia, and retired to the desert, to unite himself to God by holy prayer and penitential practices. He casually heard that on a certain day public games were about to be celebrated at Casearea, in honor of Mars; he accordingly proceeded to the city, and beheld there a great concourse, not only of Gentiles, but of Christians, who, weak in faith, were not ashamed to assist in these festivities of the devil. The saint, inspired by the Holy Ghost, proceeded to glorify the Christian religion, and to reprobate that of the pagans, who adored, and sacrificed to false gods.

The Gentiles at this interruption of the games vociferated that the saint should be put to death for this temerity; they seized upon him, therefore, and led him to the governor, accusing him of all that he had said. The governor, knowing that he had retired to the mountains, asked him why he had fled, and afterwards returned.

Saint Gordius replied: “I have returned, because I am anxious to die for Jesus Christ; and knowing thee to be the most cruel of men, I thought that this afforded me the best opportunity of satisfying my desire.”

The tyrant, hearing him speak thus, ordered the executioners to prepare their tortures. The saint, nothing daunted, fervently offered himself to Jesus Christ, and implored strength to suffer for his sake. Scourges, the rack, and fire were used to shake the constancy of the holy martyr, but he said:

“Torture me as much as thou pleases; the more excruciating my agony the greater my reward in heaven; for the wounds which now cover my body, I shall there be covered with a garment of glory; and by the pains which now afflict me, I shall earn everlasting joy.”

The governor, perceiving that he could not cause him to prevaricate by tortures, endeavored to gain him over by promises of riches and honors; but the saint answered:

“Thou art deceived if thou thinkest that I will barter the joys of heaven for the miserable advantages this world can afford.”

Finally, the judge, perceiving that promises were as ineffectual as threats, pronounced upon him sentence of death.

While the saint was proceeding to the place of execution, he friends exhorted him to yield, for the present, to the wishes of the governor, and not perish thus miserably in his youth.

The saint replied: “Weep not for me, but for those who persecute the faithful, since for them eternal fire is prepared; for my part, I am prepared to die, not once, but a thousand times, for Jesus Christ.”

They urged that, to avoid death, he might deny Jesus Christ with his tongue, though he continued to adore him in his heart.

The saint replied: “Far be it from me to deny my God with that tongue which he himself hath given me.”

He then armed himself with the sign of the cross, and went boldly to encounter death, which, according to Saint Basil and the Menologies of the Greeks, was that of fire, in which he gloriously consummated his martyrdom.