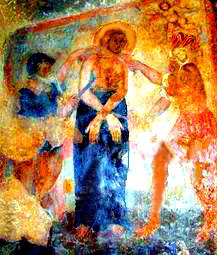 During the persecution of Diocletian there existed in the city of Sibapoli, in Syria, a celebrated nunnery, containing upwards of fifty most exemplary religious. The Superior, named Briena, was a lay of noble birth and great virtue, and had with her a niece called Febronia, whom she had reared from her third to her nineteenth year. She was exceedingly beautiful, and still more adorned by the most exalted virtue; and the pious aunt was so careful of her that she would not allow her to be seen by anybody.

Febronia, almost from her infancy, had dedicated her virginity to Jesus Christ; and, having become a religious, led a life of the most perfect sanctity. She fasted almost the entire year, her food being only bread and roots, or lentils, and she sometimes passed two days without any nutriment at all. She slept mostly upon a narrow plank, and sometimes on the ground.

It was known that there was in the convent a young lady of extraordinary beauty and virtue, and many persons were most anxious to see her and speak with her, but in vain. A young widow, however, of very noble family, called Ieria, who was as yet a catechumen, casting herself at the feet of the Superior, with many tears sought, and finally obtained, an interview with Febronia; the conversation so inflamed her with the love of God, that she immediately received baptism, induced her family to do the same, and renouncing second nuptials, dedicated herself exclusively to the service of God.

Sometime after, it was reported that the emperor Diocletian was about to send the prefect Lysimachus, accompanied by his uncle Selenus, to Sibapoli, with orders to exterminate the Christians. This news spread terror among the Christians; and the bishop, knowing the danger in which the nuns would be placed, gave them leave to depart from the convent, which they could not do without shedding many tears. The Superior, however, determined to await her crown in the convent; and turning to her niece, she wept and said,

“What will become of thee, Febronia?”

“I shall stay here, my dear aunt; what better lot could await me than to shed my blood for Jesus Christ!”

The prefect Lysimachus was inclined to show favor to the Christians, on account of his mother, who was a true believer. Hence Diocletian associated with him in the proconsulate of the East his uncle Selenus, who was a mortal enemy of the Christians, and gave the command of the troops to Primus, with directions to obey the orders of Selenus. The edicts of extermination were first executed in Palmyra, to a horrible extent, the number of slaughtered Christians being innumerable.

The pagans called the attention of Selenus to the nunnery of Sebapoli, whither a company of soldiers was forthwith dispatched. Upon breaking open the gates they were met by Saint Febronia, who casting herself at their feet, implored them to make her the first victim; but the general, Primus, struck with her appearance, went to Lysimachus, who was only twenty years of age, and informed him that he had found in the convent a lady of rare beauty, and apparently of noble family, whom he could recommend to him for a wife. Meanwhile one of the guards went to inform Selenus that Primus was endeavoring to have his nephew married to a Christian virgin, whereupon the uncle ordered that Saint Febronia should be brought before him. The young lady was accordingly laden with chains; some of the religious wished to accompany her, but the soldiers refused, when the pious aunt, taking leave of her, said:

“Go, my child, and show thyself a worthy spouse of Jesus Christ!”

When Saint Febronia was brought before Selenus, he asked her whether she was free.

Selenus asked, “Who is thy master?”

Saint Febronia answered, “Jesus Christ my Savior and my God.”

Hereupon, Selenus began to represent to her the misfortune of having been deceived by the Christian sect, and besought her to awake from the delusion, and sacrifice to the gods, who would prosper her; since she would thus contract nuptials with his nephew, Lysimachus, and become one of the most distinguished ladies of the empire. The saint, raising up her chains, said:

“I beseech thee not to deprive me of the most precious gems that I have ever worn. As regards the nuptials, I am consecrated to God, and cannot accept the sons of earth. I am a Christian, and how can I worship devils? Know that for my faith I am willing to suffer all torments.”

Selenus, infuriated by this speech, ordered the saint to be scourged, which torture was so cruelly inflicted that her body might be said to be one wound; nevertheless, Saint Febronia ceased not to bless the Lord. Selenus, thinking that her prayers were intended to insult him, ordered her to be roasted on a gridiron over a slow fire, at which horrid spectacle even the pagans turned away, while the saint continued to thank Jesus Christ, who thus made her worthy to suffer for his sake. The tyrant, not content with what she had as yet endured, caused her teeth to be knocked out, and her breasts to be torn off; but seeing that all these tortures could not shake the constancy of Saint Febronia, he ordered her head to be struck off; this completed her martyrdom, on the 25th of June, about the beginning of the fourth century.

While Primus and Lysimachus were conversing about the heroic conduct of the youthful virgin, news was brought them that Selenus, having been seized by a sudden madness, had dashed out his brains. They proceeded to his apartments and found him dead, whereupon Lysimachus ordered Primus to have the body of St Febronia laid in a rich coffin, and honorably buried. This act of piety performed, Primus and Lysimachus embraced the Christian faith, and their example was followed by many others.