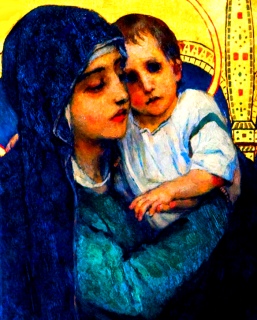 St Euplius obtained the crown of martyrdom in Sicily during the persecution of Diocletian and Macimian. He was arrested while reading the Gospel in the city of Catana, and brought before the governor, Calvisianus, with the sacred volume in his hand. The governor asked him whether he had brought those writings from his own house, or happened to have them about him.

The saint replied: “I have no house; I carry them about me, and was arrested with them.”

The judge ordered him to read something from them; and the saint read the two following texts: Blessed are they that suffer persecution for justice sake, for theirs is the kingdom of heaven. And: He that will come after Me, let him take up his cross and follow Me.

The judge inquired the meaning of these words. Euplius replied: “This is the law of God, which hath been given me.”

“By Jesus Christ, the Son of the living God.”

“Since, then, thou dost confess thyself a Christian,” said Calvisianus, “I shall deliver thee to the executioners, that they may torture thee.”

While the saint was undergoing the torture, Calvisianus said to him: “What dost thou say of thy confession?”

The saint replied: “That which I have said I now repeat: I am a Christian!”

“But why,” said the judge, “didst thou not give up those writings as the emperors have commanded?”

“Because I am a Christian. I will sooner die than deliver them. IN them is eternal life, which is lost by him who would betray what God has entrusted to his keeping.”

The tyrant ordered his tortures to be continued, and Euplius said:

“I thank Thee, my Lord Jesus Christ. Since I suffer for Thy sake, do Thou preserve me.”

The judge said: “Adore the gods, and thou shalt be set at liberty.”

The saint replied: “I adore Jesus Christ, and detest the demons. Torture as much as thou pleases, still shall I proclaim myself a Christian.”

After the saint had been tortured for a considerable time, the tyrant exclaimed: “Wretch that thou art! Worship our gods; adore Mars, Apollo, Aesculapius.”

The martyr answered: “I adore the Father, the Son, and the Holy Ghost, one only God; besides whom there is no God. May your gods find no worshippers! I offer myself a sacrifice to the true God; nor is it possible to change me.”

Calvisianus gave orders that his torments should be increased to the utmost; and while this was being performed, Euplius was heard to say: “I thank Thee, my Lord Jesus Christ. Since I endure these torments for Thy sake, do Thou succor me.”

Although the agony of his torments caused his voice and strength to fail him, his lips still moved, as if he would repeat this prayer.

At last Calvisianus, seeing that the constancy of the saint was not to be overcome, commanded his head to be struck off. The book of the Gospels was tied round his neck, and, while he was proceeding to the place of execution, the public crier proclaimed before him: “This is Euplius the Christian, an enemy to the gods and to the emperors.”

But the saint ceased not to return thanks to Jesus Christ, until he arrived at the place of execution, when, casting himself upon his knees, he said: “Oh Lord Jesus Christ! I give Thee thanks for having granted me strength to confess Thy holy name. Complete, Oh Lord, what Thou hast begun, that Thy enemies may be confused.”

Then, turning to the people who had followed him, he said: “Brethren, love the Lord with all your hearts; for he never forgets those who love him. He remembers them during life and at the hour of their death, when he sends his angels to lead them to their heavenly country.”

Having said these words, he presented his neck to the executioner, who struck off his head, on the 12th of August, in the year 304. The Christians carried off his body, embalmed and buried it. The Acts of his martyrdom are found in Ruinart.