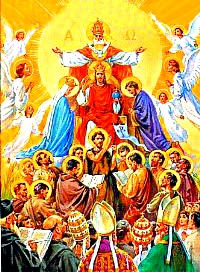 St Cyril was born at Caesarea, and while yet a child, became a Christian, in consequence of which he was maltreated, and finally turned out of doors by his idolatrous father.

Information to this effect having been given to the judge, he caused Cyril to be brought before him; and, being told that the child frequently invoked the name of Jesus, he promised him that he would effect a reconciliation with his father on condition that he would never more pronounce that name.

The holy child replied: “I am content to be turned out of my father’s house, because I shall receive a more spacious mansion in heaven; nor do I fear death, because by it I shall acquire a better life.”

The judge, in order to frighten him, caused Saint Cyril to be bound and led, as it were, to the death, but gave private orders to the executioner not to injure him.

Cyril was accordingly brought before a great fire, and threatened to be thrown in; but, being most willing to lay down his life, he was brought back to the judge, who said to him:

“My child, thou hast seen the fire; cease, then, to be a Christian, that thou mayest return to thy father’s house, and inherit thy estates.”

The saint replied: “I fear neither fire nor the sword; but I am desirous to have a dwelling more magnificent, and riches more lasting than those of my father! God will receive me. Do thou hasten to put me to death, that I may quickly go to enjoy him.”

The bystanders wept to hear the child speak thus; but he observed:

“You should not weep, but rather rejoice, and encourage me to suffer, in order that I may attain to the possession of that house which I so ardently desire.”

Remaining constant in these sentiments, he joyfully suffered death.

The Acts of his martyrdom are found in Ruinart.