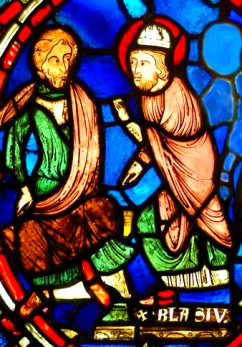 St Blase was a native of the city of Sebaste, in Armenia, and in his younger days applied himself to the study of philosophy, in which he made considerable progress; he afterwards studied medicine with great success. The science of the saints, however, and a desire to improve in the love of God, occupied his principal attention, whereby being inflamed with an ardent charity towards the poor, he went frequently to relieve them in their sickness. Upon the death of the bishop, his fellow citizens unanimously elected him their pastor, by reason of his extraordinary virtues and great learning.

He accepted the office, as being unwilling to resist the will of God, which appeared to manifest in his election to be mistaken; but in the government of his church he lost not that spirit of holy retirement which he had had from his youth. He therefore retired to Mount Argeus, without the city, and dwelt in a cave there. During our saint’s residence in this place the Lord was pleased to manifest his sanctity by honoring him with the gift of miracles, and numerous crowds of persons used constantly to come to him for the cure of their bodily diseases as well as of their spiritual maladies. Even the most ferocious animals are said to have proceeded to his cave to be relieved. If they found the saint in prayer, they would patiently wait until he was done; nor would they depart until they had received his blessing.

About the year 315, Agricolaus, governor of Cappadocia and the lesser Armenia, had been sent, by the Emperor Licinius, to Sebaste, to put to death the Christians of that city. Immediately upon his arrival, he commenced to put his bloody commission into execution by commanding that all those who had been already imprisoned for the faith should be devoured by wild beasts. He accordingly sent huntsmen into the neighboring forest to catch the ferocious animals, in order to execute his barbarous design. When they arrived at Mount Argeus, they found a multitude of these beasts assembled round the cave of St Blase, and the holy bishop in the midst of them, performing his devotions. Astonished at this sight, they returned to Agricolaus, and informed him of the fact; which, although it caused him to marvel greatly, did not prevent him from sending his soldiers to arrest our saint.

When they intimated to him the order of the governor he answered with a cheerful countenance; “Let us go to shed our blood for Jesus Christ.” Then, turning to those who stood by, he protested that he had long sighed for the honor of martyrdom, and that on the preceding night the Lord had manifested to him that he would vouchsafe to accept the sacrifice of his life.

As soon as the news was spread among the citizens that their bishop was being led to Sebaste by order of the governor, the streets were filled with people who, with tears in their eyes, asked his blessing. Among the rest was a woman, who, weeping bitterly, presented to him her child, who was expiring by reason of a small bone having stuck in his throat. Full of holy confidence, she besought the saint to save his life. St Blase, moved to compassion by the tears of the afflicted mother, prayed to the Lord not only for the relief of that child, but of all those who would find themselves similarly afflicted. Having terminated his prayer the child perfectly recovered; and hence the origin of the peculiar devotion of the faithful to his saint when afflicted with diseases of the throat.

When St Blase arrived at the city and was presented to the governor, he was commanded to sacrifice to the immortal gods.

Saint Blase answered: “What a title for your demons, who can bring only evil on their worshippers! There is only ONE Immortal God, and Him do I adore.”

Agricolaus, infuriated at this answer, caused the saint to undergo a scourging so prolonged and cruel that it was thought the saint could not possibly survive it, but having endured this torture with placid courage, he was sent to prison. There, he continued to work miracles so extraordinary that the governor ordered him to be again lacerated with iron hooks.

The blood of the saint ran profusely, and certain pious women were induced to collect portions of it, which act of devotion was amply rewarded, for they were seized, with two of their children, and brought before the governor. He commanded them to sacrifice to the gods under pain of death. The holy women asked for their idols, and some thought, to sacrifice to them, but they no sooner laid hands upon them than they cast them into an adjoining lake, for which they were instantly beheaded, along with their children.

Agricolaus resolved to wreck his vengeance on St Blase, and not content with the torture which he had already caused him to endure, commanded him to be stretched upon the rack, and his flesh to be torn with iron combs, in which state a red-hot coat of mail was placed upon him. Finally, the tyrant, despairing of overcoming his constancy, ordered him to be cast into the lake. The saint, arming himself with the sign of the cross, walked upon the waters, and, arriving at the middle, sat down and invited the idolaters to do the same if they believed that their gods could so enable them. Some were so rash as to make the attempt, but were immediately drowned.

St Blase was admonished then by a voice from heaven to go forth from the lake and encounter his martyrdom. When he reached the land the impious tyrant ordered him to be beheaded. This sentence was executed in the year 313. The republic of Ragusa honors him as their principal patron, and he is the titular saint of many cities.