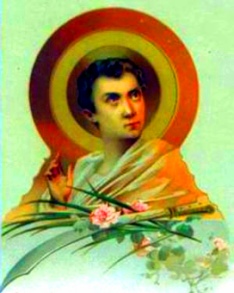 Saint Arcadius was a native of Africa, and most probably suffered in Caesarea, the capital of Mauritania. A furious persecution – during which the Christians were cruelly dragged before the idols to sacrifice – was raging, when Arcadius withdrew to a solitary place, where he employed his time in fasting and in prayer. Meanwhile, as he appeared not at the public sacrifices, soldiers were dispatched to surprise him in his house, but not finding him, they arrested one of his relatives, in order to make him discover the retreat of his kinsman.

Saint Arcadius was unwilling that anther should suffer on his account, and presented himself to the governor, saying that his relative might be discharged, as he had come to answer for himself. The governor replied that he also might depart unhurt if he would sacrifice to the gods. The saint courageously answered:

“Thou art deceived if thou believest that threats of death can affright the servants of God. They say with Saint Paul, ‘To me to life is Christ, and to die is gain.’ Invent, therefore, what tortures thou canst, we shall never be separated from our God.”

Hereupon the tyrant, full of wrath, and thinking the usual tortures too light for Arcadius, ordered that joint by joint should be chopped off the saint’s body, beginning with his toes. The barbarous butchery was instantly executed, during which the holy martyr ceased not to bless the Lord. After his body had been reduced to a mere trunk, calmly surveying his mangles limbs scattered around him, he exclaimed:

“Oh, happy members that have served to manifest the glory of God! Now that I behold you separated from my body, you are dearer to me than ever. I now know that I belong to Jesus Christ, as I have always desired.”

Then turning to those present, who were idolaters, he said:

“Know ye that all these sufferings are easily overcome by those who continually keep before their eyes the eternal life that God bestows upon his servants. Adore the true God, who consoles me in these tortures; and abandon the worship of your false gods, who cannot assist you in your need. He who dies for the true God acquires life everlasting. Behold, for having suffered these torments, I go to live with him eternally, without the fear of ever losing Him.”

Having finished his discourse, he placidly gave his soul to his Redeemer, on the 12th of January.

This martyrdom filled the idolaters with confusion, and inspired the Christians with a great desire of laying down their lives for Jesus Christ. They afterwards collected the scattered limbs of the martyr, and gave them honorable burial.