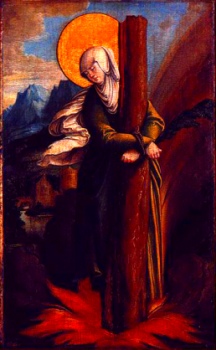 The history of Saint Afra is related by most respectable authors, such as Fleury, Orsi, and Massini. Penitent sinners may receive great encouragement from the consideration of the fortitude communicated to this penitent by the Lord, which enabled her to suffer the martyrdom of fire; and also from the consideration of the wisdom given to her, by which she answered the insidious arguments that were intended to pervert her.

Saint Afra was a citizen of Augsburg, in Bavaria, and a pagan of so dissolute a character, that her house and its inmates were used by her for the infamous purpose of corrupting the youths of that city. But the triumph of divine grace appeared the more brilliant in bringing this most wretched creature from the very lowest abyss of infamy to the glory of martyrdom.

It is believed that Saint Afra, together with her mother and entire family, was converted by the holy bishop, Saint Narcissus. From her Acts, found in Ruinart, it would appear that she had always before her eyes the deformity of her crimes, and was tortured by the recollection of them; so that when she had embraced the faith, she endeavored to get rid of the price of her infamy by giving liberally to the poor; and when some Christians, although in extreme penury, refused to receive from her what had been the wages of sin, she would beseech of them to accept it, and pray to God for the remission of her grievous offences. Thus did this holy penitent prepare herself to receive from God that glorious palm which she finally obtained.

The persecution of Diocletian was raging when Saint Afra was arrested and brought before the judge named Gaius, who said to her: “Come now, sacrifice to the gods; it is better to live than to die amid torments.”

The saint replied: “The sins which I have committed before I knew the true God are sufficient; wherefore I cannot now do that which thou commandest. I never will do so: it would be adding a new insult to my God.”

The judge having ordered her to repair to the temple, she answered with great courage: “My temple is Jesus Christ, whom I have continually before mine eyes, and to whom I every day confess my sins. Since I am unworthy to offer him any other sacrifice, I am anxious to sacrifice myself, in order that this body, with which I have offended him, may be purified by torments; this reflection shall make me suffer most willingly.”

“Since, therefore,” said Gaius, “by reason of thy wicked life thou hast nothing to expect from the God of the Christians, thou hadst better sacrifice to our gods.”

The saint replied: “My Lord Jesus Christ has said that he descended from heaven to save sinners. We read in the Gospel that a sinful woman, having washed his feet with her tears, obtained from him the forgiveness of all her offences; and, moreover, that he never rejected sinful creatures nor publicans; but, on the contrary, condescended to converse and even to eat with them.”

The iniquitous judge was not ashamed to counsel her to return to her infamous practices, in order that she might gain the favor of the gallants, and enrich herself.

“I renounce,” said the penitent Saint Afra, “that execrable gain, and look upon it with horror. That which I had, I have cast from me and given to the poor, imploring them to accept it; how, then, can I consent to earn it again?”

After this the discussion was continued in the following manner:

Gaius said: “Thy Christ esteemeth thee unworthy of him; in vain thou callest him thy God; he will have nothing to do with thee; a common prostitute cannot be called a Christian.”

“True,” replied Saint Afra, “I am unworthy of this name, but my God, who chooseth not persons according to their merits, but according to his own goodness, hath been pleased to accept me, and make me a participator of his name.”

“And whence knowest thou that he hath done thee this favor?”

“I know that God has not cast me off, since he has given me strength to confess His holy name; and I feel a hope within me that I can thus obtain the pardon of all my sins.”

“These are foolish stories,” replied the judge; “sacrifice to our gods; because they alone can save thee.”

“My salvation,” answered the saint, “depends alone upon Jesus Christ, who, while hanging on the cross, promised heaven to a robber that confessed his sins.”

“If thou wilt not sacrifice, I shall cause thee to be stripped and whipped publicly, to thy great shame.”

“I am ashamed only of my sins,” Afra responded.

“And I,” said Gaius, “am ashamed to be losing my time in disputing with thee. Sacrifice to the gods, or I shall condemn thee to death.”

“That is what I desire, since I hope thus to find an eternal repose.”

Gaius threatened that if she would not sacrifice, he would order her to be tortured and burned alive.

The saint courageously replied: “Let this, my body, which hath been the instrument of so many sins, undergo every torment; but let my soul not be contaminated by sacrificing to demons.”

The judge then pronounced sentence upon her, in the following words: “We ordain that Afra, a prostitute, who has declared herself to be a Christian, and has refused to sacrifice to the gods, be burned alive.”

The place selected for the execution of this terrible sentence was a little island in the river Lech. The saint, having been conducted to this place, and the executioners having tied her to the stake, she raised her eyes to heaven, and prayed after the following manner:

“Oh Lord Jesus Christ, who camest to call, not the just, but sinners to repentance, and who hast vouchsafed to make known unto us, that, upon whatever day the sinner shall return to Thee by contrition, Thou wilt forget all his offences; receive me now, a poor sinner that offers herself to suffer this torture for Thy love. By this fire, which is about to burn my body, deliver my soul from everlasting flames.”

At the termination of this prayer, fire was set to the pile, and the saint was heard to say, “I give Thee thanks, Oh Lord, who, being innocent, didst offer Thyself a sacrifice for sinners; and being the ‘Blessed of God, didst vouchsafe to die for us ‘children of wrath.’ I give Thee thanks, and offer myself a sacrifice to Thee, who, with the Father and the Holy Ghost, livest and reignest world without end. Amen.”

Her three servants, Eunomia, Digna, and Eutropia, were standing on the banks of the river winessing her martyrdom. As they had been partners in her vice, they had also imitated her in her conversion, and had been baptized by the holy Bishop St. Narcissus. Knowing that their mistress was now dead, they crossed over to the island; and the news having reached Hilaria, the saint’s mother, she also came, accompanied by some priests; they took the saint’s body and carried it to the family burying-place, two miles distant from Augsburg. Gaius, having been informed of this, sent a troop of soldiers with orders to arrest all who were at the burying-place, and, in case they refused to sacrifice, to shut them up in the sepulcher, and burn them there. This barbarous order was cruelly executed, and thus all these holy women received the crown of martyrdom in the year 304.