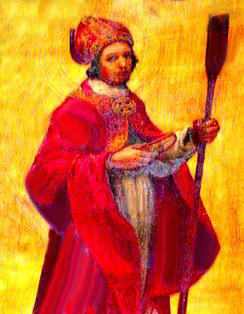 Saint Adalbert was born in Bohemia, of noble parentage, about the middle of the tenth century. His father, a Slavonian, sent him to study at Magdeburg, under the care of the Archbishop Adalbert; who placed him in a school, under the direction of a holy monk, named Odericus, where the pupils, by serious attention to their studies, and most exemplary morals, edified one another.

Saint Adalbert, having remained nine years in this school, made considerable progress in human sciences, but still more in the science of the saints; for whatever time was allowed for recreation, he spent in holy prayer, in relieving the poor, and visiting the sick. Having made a copious collection of books, consisting chiefly of the writings of the Fathers and Doctors of the Church, he returned to Bohemia, and entered the ecclesiastical state at Prague. Diethmar, bishop of that city, was greatly enamored of his virtue, and ordained him sub deacon shortly before his death.

An assembly was held to propose a successor, at which the prince of Bohemia and other grandees were present, and, by unanimous consent, Saint Adalbert was chosen. Notwithstanding all his reluctance, and his pleas of unworthiness and youth, he was obliged to accept the onerous charge; and the election having met the approval of the emperor, our saint received the Episcopal consecration at the hands of Villegisus, Archbishop of Mayence. He immediately proceeded to Prague, to take possession of his see, and was received amid the acclamations of the people. In assuming the government of his Church, his extraordinary piety became manifest; for on all festivals he distributed abundant alms, and supported twelve poor persons continually. He slept upon the bare floor, or upon sack-cloth, and passed a considerable part of the night in prayer. His continual preaching, and frequent visits to the sick and those in prison, manifested how totally he was devoted to the glory of God and the welfare of his flock.

But they treated his admonitions with an obstinacy surpassing the enthusiasm with which they had at first hailed his arrival; and Saint Adalbert accordingly resolved to leave them, having first consulted, and obtained permission from Pope John XV. His first intention was to make a pilgrimage on foot to the Holy Land; but on his arrival at Mount Cassino, the Abbot and some of the monks induced him to remain with them for some time, until it became known who he was; whereupon the holy bishop proceeded to Rome, and, by the advice of the Pope, received the religious habit in the monastery of St. Alexis, in the year 900. Here he lived in tranquility for three years and a half, until the Duke of Bohemia, moved by the wretched state of the Church at Prague, induced the Pope to send him back.

Upon his return, the most ample promises of obedience were made, but never fulfilled. So the saint again abandoned his rebellious flock, and went to preach the Gospel to the idolaters of Hungary. His success here, however, was not proportionate to his zeal; and the Bohemians continuing as obstinate as ever, he again returned to his monastery at Rome.

He was obliged by the Pope to repair a second time to Prague. The saint set out in obedience to this command; but being informed that his ungrateful flock had shown their implacable hatred of him by murdering his bothers, he requested the Duke of Poland to ascertain whether they were willing to receive him. The Bohemians replied: “Adalbert is a saint, and we are sinners; so it is impossible to expect that we can live quietly together.” The saint took this as a sufficient exoneration from the solicitude of his Church, and went to undertake the conversion of the pagans who were then in Prussia.

After he had suffered many hardships on this mission, the idolaters one day assembled in great numbers, and demanded of him why he had entered their country. The saint replied that he had come for their salvation, and exhorted them to abandon the worship of idols, and to adore the true God. But the barbarians were displeased at his words, and Siggo, the priest of the idols, ran him through the breast with his lance, whereupon the others rushed upon his also, while the saint, raising his hands to heaven, prayed to the Lord for their conversion. The inhuman wretches placed his head upon a pole, and bore it away amid shouts of exultation. His martyrdom happened on the 23rd of April, of the year 997, and the Lord honored him by many subsequent miracles.