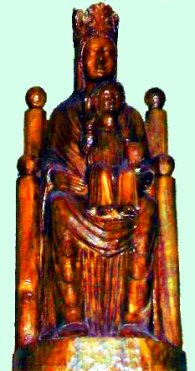 The Abbot Orsini wrote: “In the year 911, the city of Chartres was miraculously delivered from the siege laid to it by Rollo or Raoul, Duke of the Normans; for as he was on the point of taking the city, Gaucelin, the forty-seventh Bishop of Chartres, mounted on the top of the ramparts, holding a relic of Our Lady as an ensign, which struck such terror in the camp, that all retreated in disorder; in memory of this fact, the meadows of the gate of Drouaise are called, to this day, the meadows of the fugitives (des Recules).”

Due to the circumstances of its geographic location, the city of Chartres was subject to Viking raids during the 9th and 10th century. In the year 858, the city was sacked and burned. Early in the 10th century a Viking chieftain (later known as Normans, having founded Normandy) named Rollo came to power, and he led an army of a few thousand Vikings against Chartres in the spring of the year 911. Chartres was surrounded by a strong wall which held the Vikings in check, so the Vikings were forced to lay siege to the city, his men spoiling the surrounding countryside as the days progressed.

Eventually Duke Robert and Duke Richard assembled an army south of Chartres to oppose the fierce Vikings. The relieving force was made up mainly of Burgundians and Franks, and they hoped they were strong enough to attack and drive off the Vikings as the inhabitants of Chartres continued to resist. They finally attacked the Vikings on July 20th, 911, before the walls of Chartres.

When the Franks and Burgundians advanced, Rollo had his army drawn up in a concave pattern which pressed hard against the center of the opposing army. Huge, berserk Vikings smote the French line, and Duke Richard, under great pressure, began to slowly give ground, which would mean the collapse of his army. Rollo was fighting valiantly, certain he was about to vanquish his enemy, when suddenly Bishop Gaucelin, who led the defense of Chartres, sallied forth from the gates of Chartres surrounded by the steel clad defenders of the city. Unmistakable in his Episcopal mitre, holding aloft the tunic of the Blessed Virgin Mary, a relic then kept at Chartres, the defenders of the city fell upon the Vikings with sword and spear. The Vikings, caught between the enemy forces, retreated in defeat.

“Rollo, mighty and powerful and vigorous and most fierce in arms,
Do not feel ashamed if you now are considered a runaway.
No Frankish or Burgundian assembly
Of manifold nations and hosts puts you to flight, fells you,
But the nourishing tunic of the Virgin mother of God and
Likewise amulets and relics and the reverend cross
Which the reverend prelate carries in his worthy hands.”