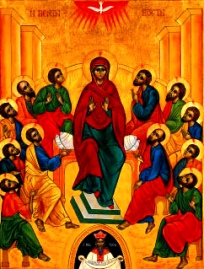 May 5: Queen of Apostles

The apostles understood better than anyone else the great privileges of Mary. They realized her sanctity; they recognized her virtues; they knew how she had cooperated in the work of redemption; they knew how Jesus loved her. During the public life of Christ they were closely associated with the Blessed Mother. They were with her through the suffering of our Lord. With Mary they persevered in prayer in the upper room, waiting for the coming of the Holy Spirit. During this long association, even before the death and resurrection of Jesus, the apostles came to know her as their Queen and Mother.

Great must have been her zeal and joy when she could preach Christ crucified, living in herself, as she abode, during the years in pagan Ephesus with the Beloved Disciple. Her Son was no longer a hidden God, but One on High, risen from the dead. Mary perhaps converted many by her spotless life, where the virtues of a Christian shone the more gloriously because set in a pagan land.

Mary is Queen of the Apostles in another sense. The apostles were zealous but they had their defects. They sometimes showed lack of courage, faith, humility and meekness. Mary, on the contrary, had every virtue in perfection, especially those of the true missionary-zeal and the spirit of sacrifice. Mary merited the title Queen of Apostles by years of exile in foreign countries among pagans. She saw mission life in all its phases.

We need the example and inspiration of Mary to convert the world. We need her virtues to win the world to her Son. It will strengthen all who are interested in spreading the Faith, to reflect that Mary spent so many of her days on earth among the heathen. Thank God, our missionaries, our modern apostles, our priests and sisters and brothers, and lay people in the missions, take her for their model.

A feast of Mary under the title Queen of Apostles is observed in Pallottine Redemptorist churches and other churches. It has a proper Mass; the collect refers to the coming of the Holy Spirit upon Our Lady and the Apostles, and asks Almighty God that, under Mary’s protection, “we may be enabled faithfully to serve Thy majesty, and by word and example to spread abroad the glory of Thy Names.”

Art and literature on the theme of Queen of Apostles is scant. The first picture of Mary, Queen of Apostles, was executed by Overbeck at the request of Palloti. It shows the Descent of the Holy Ghost with Mary as the center of the group. Today it is in the International College of the Pallotins in Rome.

*from Feasts of Our Lady, by Msgr. Arthur Tonne, and The Woman in Orbit

Return to Marian Calendar May Page