Our Lady of Victory
Paris 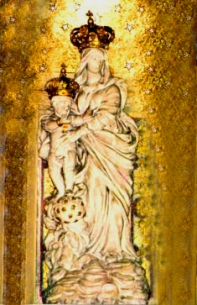 December 3: Our Lady of Victory
Paris

The church of Our Lady of Victory in Paris was built in 1629 by King Louis XIII in thanksgiving for favors granted him by the Blessed Mother. The parishioners for a century and a half were known for their devotion to the Blessed Virgin.

With the French Revolution the church fell upon evil ways and days. All sorts of outrages were performed in it by the revolutionists. Afterwards it was used by a schismatic sect and later became a stock exchange. In 1809 it was restored to its original purpose but there were few parishioners left.

Father Charles Fritche des Gennettes was transferred to the church of Our Lady of Victories in 1832. He had been the pastor of Catherine Laboure. Father noticed that scarcely anyone came to Mass or received the sacraments. He tried all in his power, but to no avail, to bring the people back to the faith. Discouraged, he decided it was his duty as a failure to resign.

Our Lady of Victory
Paris

On Sunday, December 3, while saying Mass in an almost empty church, he, at the cannon of the Mass, cried out in distress. At that moment he heard a calm distinct voice say very solemnly:

“Consecrate your parish to the Most Holy and Immaculate Heart of Mary.”

After Mass he wondered whether he had imagined it; then again during his thanksgiving, he heard the same words. No longer doubting, he took a pen and composed the rules for the confraternity of Our Lady and received the Bishop’s approval the same week.

The following Sunday, he told the ten people at Mass about his project and said there would be vespers of Our Lady that evening, and afterwards all details of the Confraternity of Our Lady would be given.

When Father Gennettes entered the church that evening, he found it filled for the first time in years; more than 400 people were there. The parish continued to flourish from then on. People came to the church from all other parts of Paris and France and finally, all parts of the world knew of the famous shrine, which now holds about 90,000 thank offerings for cures and favors.

In March 1855, a thanksgiving octave for the proclamation of the dogma of the Immaculate Conception was held. At the end of the octave, the statue was seen to move. This happened again and Pope Pius IX took this as a sign of thanks for his act, and ordered the statue to be crowned in June of 1850. Saint Therese of the Child Jesus was cured through the intercession of Our Lady of Victories.

The green scapular (1840) is really a medal of the Immaculate Heart of Mary in cloth form.

Our Lady of Victory Paris

Return to Marian Calendar December from Our Lady of Victory Paris