Our Lady of Trapani 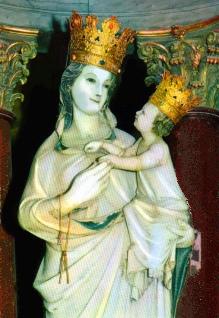 August 16: Our Lady of Trapani, Sicily

This Modanna is venerated in a chapel of the sanctuary or shrine of Our Lady of the Annunciation (Santuario dell’ Annunziata) in Trapani, Sicily, some 45 miles west of Palermo.

There are several stories about the origin of the title of Our Lady of Trapani. According to one, the origin of the image dates back to the year 733, and it was the work of a sculpture on the island of Cyprus. He placed it in a church of Fagamusta, where it remained a center of devotion to the Virgin for 400 years.

Our Lady of Trapani

The image seems to have remained in Jerusalem for almost 150 years. Then, after the failure of the 7th Crusade, one of the Knights Templar – said to have been Guerrogio of Pisaset, sailed for Italy taking the image with him, possibly to save it from profanation by the Turks. During the course of the voyage, the ship ran into a terrific storm and soon it appeared that the ship and all on board were doomed. But the knight did not despair – he prayed fervently to the Blessed Mother and solemnly promised her, if they weathered the storm he would enshrine her image on the first land they would touch.

The storm died down and eventually the ship landed at Trapani, Sicily. The story of the miraculous image of Our Lady of Trapani quickly spread among the people of Trapani and they decided to erect a church in Mary’s honor. Work soon began and the church was completed around 1332. It was rebuilt in 1760.

At one end of the church behind the main altar, there is a fine chapel and in it stands the venerated image of the Madonna of Trapani, a statue of marble, depicting the Virgin with the Infant on her left arm. A new statue was sculptured, for modern authorities think the present statue is a work of the 13th century art schools, possibly of the Fisan School. However, Our Blessed Mother needs neither time, artists, nor sculptors to make her image famous.

Return to Marian Calendar August from Our Lady of Trapani

Return to Titles of Mary from Our Lady of Trapani