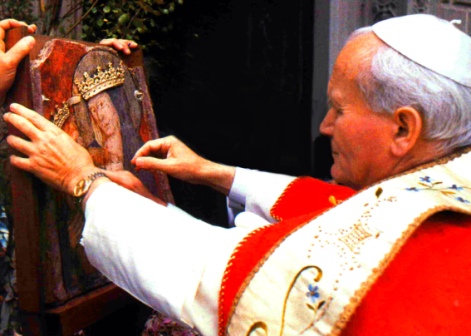 March 10: Our Lady of the Vine, Tuscany, Italy

The Abbot Orsini wrote: “Our Lady of the Vine, Tuscany, Italy. A fine church, located near Viterbo, occupied at present by Dominicans.”

The city of Viterbo is located at the foot of Mount Cimino in the province of Rome. Viterbo itself currently has 34 separate parishes, with 8 religious houses for men and 18 houses for sisters. I can find no reference to Our Lady of the Vine, or Madonna della Vito, anywhere in the entire region of Tuscany.

I found two references to Dominican convents. The first was Our Lady of the Oak, or Madonna della Quercia, which also has a Dominican convent attached.  The second was Santa Maria dei Gradi, of which only the church still remains. It was one of the earliest Dominican convents, although it is now used mainly as a retreat house.

The Heavenly Mother, like all mothers, does not discriminate between children, for her help is for everyone. We now continue with Our Lady of the Oak, which is almost surely the place referred to be the good abbot as Our Lady of the Vine.

At one time in Viterbo there was a certain man named Mastro Baptist Magnano Iuzzante, who was a very God-fearing devotee of the glorious Virgin Mary. He hired a painter named Monetto in the year 1417 to paint an image on a tile of the most glorious Virgin Mary holding her Son in her arms. Mastro Baptist then lovingly laid the tile on an oak tree that stood at the edge of his vineyard, near the road leading to Bagnaia and along which robbers often awaited to attack unwary travelers.

The image remained there for about 50 years under cover of the oak’s branches, and after a while only a few women who passed by ever stopped to say a prayer and to admire the beauty of a natural tabernacle that a wild vine, which had embraced the oak, had created.

During this period a hermit of Siena, Pier Domenico Alberti, whose hermitage was at the foot of Palanzana, went around the countryside and the nearby towns of Viterbo, saying, "Among Bagnaia and Viterbo there is a treasure."

Many people, driven by greed, started digging there but found nothing and asked for an explanation from the hermit. Domenico then brought them under the oak tree chosen by the Virgin and pointed to the real treasure, the Madonna. He told them of the day he had decided to take away the sacred image to his hermitage, and of how it had returned to the oak.

Dominico was not alone in this experience. A devout woman named Bartolomea often walked past the oak tree and stopped each time to pray to the Blessed Virgin. One day she also decided to take the tile to her home. After saying her evening prayers, Bartolomea went to bed, but woke up in the morning to find the image missing. She at first thought that her family had taken it to place it somewhere else, but upon learning that this was not so, she ran to the oak tree and saw what he had already guessed: the tile had miraculously returned to its place amid the tendrils of the vine.

Bartolomea tried again, but always the sacred image returned to the tree. At first she did not say anything to anyone to avoid being taken for being mad.

Then, in 1467, during the month of August, the whole region was struck by the greatest scourge of those times: the plague. Everywhere there were the bodies of the dead lying in the deserted streets, and there was everywhere great weeping and mourning. Some then remembered the image painted on the humble tile, and, as if driven by an inexplicable force, went to kneel beneath the oak. Nicholas of Tuccia, an historian, said that on one day 30,000 people were there to beg for mercy.

A few days later the plague ceased, and then 40,000 of the faithful came back to thank the Virgin Mary. The people of Viterbo were headed by their bishop Pietro Gennari, and there were many from other regions.

In early September of the same year another extraordinary event happened.

A good knight of Viterbo had many enemies, as will often happen to a follower of Christ. One day he was surprised by his enemies outside the walls of Viterbo. Alone and unarmed, and having no way to deal with the mortal danger, he fled into the nearby woods. Fatigued and desperate to reach his destination, the knight heard the cries of the enemy draw nearer and nearer. Eventually he arrived at the oak with the sacred image of Mary, where he fell at her feet with great faith and embraced the trunk of the tree, putting his life into the hands of his Heavenly Mother.

The knight’s enemies reached the oak, but were surprised that they could no longer see the knight. They began to look behind every tree and bush, but not one could see him since he had disappeared before their very eyes. Failing to find him after a long time spent in searching, they gave up in disgust.

Then the knight, after thanking the Virgin Mary, returned to Viterbo and told everyone what had happened. Bartolomea heard his tale, and encouraged by his words, she described the miracles to which she had been a witness. They told everyone what had happened to them with so much enthusiasm, faith that devotion that the stories spread like wildfire, and many people, coming from the most diverse regions of Italy, flocked to the feet of the oak to implore help from the Blessed Virgin.

It was decided to build an altar, and then a chapel of planks before Pope Paul II gave the necessary permission to build a small church in 1467. Many popes and saints have been devotees of the image, including St Charles Borromeo, St Paul of the Cross, St Ignatius Loyola, Saint Crispin of Viterbo, and St Maximilian Kolbe, among many others.

On January 20th, 1944, during the bombing of Viterbo, a squadron of 12 bombers headed for the oak, but upon arriving at their destination, inexplicably veered to the right and the bombs dropped did not destroying anything outside of  the asylum which was empty. The remains of the bombs, 3 large chunks, are kept behind the altar of the Madonna.

In 1986, Pope John Paul II proclaimed Our Lady of the Oak Patroness of the new diocese of Viterbo, formed from the union of those of Viterbo, Tuscania, Montefiascone, Acquapendente and Bagnoregio.

Even today the Virgin protects her devotees, and the devotion to the Blessed Virgin of the Oak is very strong.

Every year on the second Sunday of September, the faithful commemorate the "Benefits from the Sacred Image of Our Lady of the Oak." Many cities and towns, with their brotherhoods, participate in the procession of thanksgiving, called the "Covenant of Love " The mayor of Viterbo, on behalf of all participants, renews the consecration made of old by the whole region back in 1467.