Our Lady of the Valley 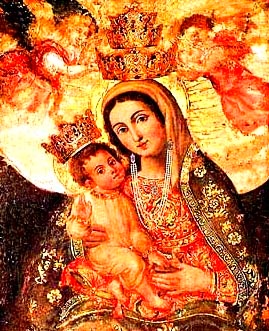 The Sicilian shrine to Our Lady of the Valley, or of the Green Valley, (Our Lady of Valverde) is said to have originated about the year 1040.

According to tradition, a soldier named Dionysius remained behind on the island of Sicily to engage in banditry, having been enticed by the wealth on the island and his greed for the money he felt he could easily steal from others. Assault, theft and murder meant nothing to him. Dionysius found a cave in which to hide, and then lurked in the shadows of the thick woods along the path that led from Catania to Aci. Dionysius was so active that this region near Mount Etna soon became infamous as the scene of robberies, violence and even murder.

At that time there was a certain man named Giles who lived in the city of Catania. In the course of business it became necessary for him to make the dangerous trip to Aci. Now, while Giles was aware of the danger, he was a pious man who was greatly devoted to the Blessed Virgin Mary, and he was absolutely convinced that she would watch out over him on his journey.

Our Lady of the Valley

As Giles passed through the wood beneath Mount Etna, (which is actually a volcano) a bandit barred his way and threatened his life with a dagger.

Suddenly the earth shook violently and a globe of blinding light appeared nearby. From within the light a woman’s voice could be heard:

“Dionysisus, Dionysius, do not touch my devotee.”

The assassin’s arm was frozen by the command. He turned and looked around at the light.

“Lay down that weapon – and cease this life of banditry.”

At these words Dionysius saw in a flash the monstrosity of what had been his life passing before his eyes. Throwing away his knife, he humbly acknowledged the errors of his former life and prostrated himself at the feet of his intended victim, begging his forgiveness.

Dionysus retreated alone to his cave to weep over his sins. Knowing his sincerity, the Blessed Virgin Mary appeared to him where he lived to comfort him. She urged him to trust in the goodness and mercy of God and go at once to confession. She also requested that a church be built on the hill of Valverde with the wealth Dionysius had obtained through his life of crime.

Within a few days word got out about what had happened, and the faithful from Aci processed to the hill of Valverde. Once on the hill they observed a noisy flock of cranes hovering in the sky before landing on a particular clearing nearby. Taking it as a sign, the bandit turned hermit began the work of constructing the chapel on that very spot. Although he began working immediately, and with impressive fervor, progress soon came to a halt due to the lack of a water supply.

Dionysius turned in prayer to the Virgin Mary, who once again appeared to order that a pickaxe be used to strike at the base of the rock forming the entrance to the bandit’s cave. The result of the blow was a trickle of water that formed a pool sufficient not only for the continuation of the work, but also proved to be miraculous, as it soon became a source of healing for many of the sick who came and drank there. So many people came to assist that the work that had begun in the year 1038 was finished only two years later.

Dionysius kept the faith and continued to live on Valverde as a hermit. One night he was rapt in prayer when he was struck by an intense beam of light and saw a cloud in which the Madonna appeared surrounded by heavenly angels. The light dispersed as the cloud rose toward heaven, revealing a magnificent image of the Blessed Virgin and her Divine Son imprinted on the rough wall of a pillar of the church.

The image, now known as Our Lady of the Valley, depicts the Virgin Mary seated and wearing a robe with gold accents. Her head is covered with a veil, although Mary’s hair can be seen framing her face. With her right hand she holds the Divine Child, who is seated upon a red and gold cushion. He has curly hair, and is dressed in a white tunic. His right hand is raised in blessing, while the other rests upon a small crane that seems to hide behind the Virgin’s left hand.

In the year 1565 a group of Christian soldiers stopped here to invoke the aid of Our Lady of the Valley while on their way to the island of Malta. Suleiman the Magnificent was about to lay siege to the island fortress with countless thousands of his finest warriors, while only 600 knights of St. John would stand against them to defend the stronghold. These Christian soldiers were the same who would later operate the cannon that fired the round that mortally wounded the infamous pirate commander Dragut Rais. A votive offering of two iron cannon balls now hang to the left of the altar as testimony and thanksgiving for the assistance of the Mother of God during that siege.

The feast of Our Lady of the Valley is kept throughout three dioceses of Sicily.