Our Lady of the Star
Portugal 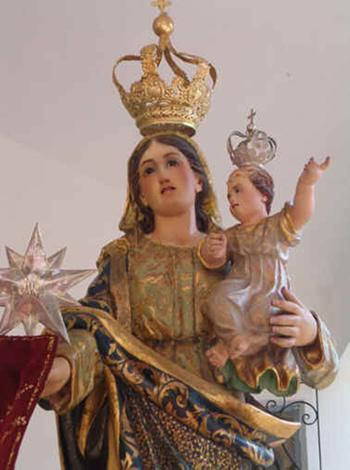 March 7 – Our Lady of the Star, Portugal

In the year 1050 there were two Benedictine monks who lived in the convent of Monte Cassino. They decided to go on pilgrimage, teaching and catechizing all those they met along the way.

One night they found themselves wandering on the coast of Normandy, France, near a place called Grand Champ. Tired and sleepy, they decided to spend the night on the beach under the stars. Father Rogerio slept on the cool sand and the other monk found himself a place to rest in a small boat nearby.

As the night went on the tide came up and the little boat was gently drawn out onto the sea. Without realizing it, the monk was going on an adventure in which he would not awaken until he was just off the coast of England.

In Salisbury, England, everyone was amazed to see the monk in the little boat, convinced that it was a miracle that he had crossed the French Sea in a small boast and lived to see the shores of England. Soon, the monk was made Bishop and his period in office was marvelous to the people because he was a humble man of prayer who sacrificed everything in the name of God.

The monk who had stayed on the beach, Father Rogerio, knew nothing of what had happened to his friend. All he knew was that he and the boat had disappeared, and giving his concerns into the hands of God, he determined to continue on his journey alone.

One night not long afterward, Father Rogerio went to sleep and had a dream that would change his life forever. In his dream he saw a great star fall from the sky, burning all the bushes and trees, and heard a voice that said: "Our Lady wants a church built in this place."

When he awoke, Father Rogerio looked about himself. He was not injured, but this indeed was the place he had seen in his dream, for everything around him was burned. Father understood that Our Lady really did desire that he should build a church there in her honor. He also felt in his heart the desire to give Mary the title of "Our Lady of the Star," because of the star he had seen in his dream.

Due to the poverty of those who inhabited that region, Father Rogerio was only able to build a small altar and a tiny chapel which would be the seed of the great Abbey of Our Lady of the Star of Monteburgo. One day an immense chapel would be built, sheltering not only the Church but a very large convent as well.

King William, who was the Duke of Normandy and he who had conquered England, learning of the shrine of Our Lady of the Star, sent his private doctor to visit the little chapel to find out for himself how it had all come about. Upon arriving there, the doctor discovered that he was the brother of the monk Rogerio! He listened to his brother's account of how he had been separated from his friend, and then told about his dream. The doctor believed everything at once, and to Father Rogerio's surprise, the doctor knew the monk who had crossed the channel in a small boat, and informed his brother that his lost friend had become the Bishop of Salisbury! The two brothers excitedly thanked Our Lady for providing this reunion.

The Bishop of Salisbury, our former friend of the monk Rogerio, asked King William to help his brother in the faith, for they were both blessed by Our Lady on their pilgrimage.

William the Conqueror, with a glad heart, donated to Father Rogerio the entire region of Monteburg, along with the resources to build a great church and an Abbey there that became a great seminary. The work was finished by the son of King William, King Henry. He, taking the throne, continued the work until its completion. The Abbey of Our Lady of the Star was, for many centuries, a center of reference of the Church for the whole region.

Dark centuries ensued, and the church and abbey suffered a decline until in 1842, the Vicar General of Coutances took possession of what was by that time little more than an enclosure of ruins. He turned it over to the Brothers of Mercy, a new order meant to promote Catholic education. The abbey church was rebuilt, but as time went on the Brothers of Mercy also left, and all is now used as part of an agricultural school. As for Our Lady of the Star, it is a story almost completely forgotten, even to Catholics.

Prayer to Our Lady of the Star