Our Lady of the Palm 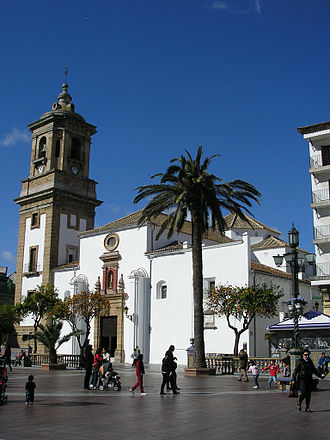 The Church of Our Lady of the Palm preceded by some time the miracle which made it famous. There is no exact record of why it was named that way.

The miracle for which it is best remembered took place during an earthquake and a tidal wave on the first of November, 1755. There had been an extremely strong earthquake on that day that was reported to have been felt throughout all of Europe. Algeciras is a seaport of Spain exposed to the Atlantic Ocean in the province of Cadiz and was directly in the path of the tidal wave said to be more than 90 feet high. The recently reported tsunamis in Asia pale in comparison to that wave. Lisbon, with 275,000 inhabitants, was said to have lost 90,000 people and had 85% of its buildings destroyed from the wave. The water penetrated as much as 8 kilometers inland, mainly striking Portugal, Spain, and Africa.

The townspeople of Algeciras were in terror and were on the point of abandoning the town when two unidentified men – thought later to be the patron saints of the city – closed the water gates and urged the people to go to the Capuchin Church of Our Lady of the Palm. Here a Mass was in progress. The priest calmly finished the Mass, seized a banner with a picture of Our Lady on it, and went out into the street where the wall of water was already advancing upon them. He planted the banner in the street almost in the shadow of the great wave and called out in a loud voice, “Thus far, my Mother.”

Our Lady of the Palm

The water advanced as far as the banner, and then miraculously stopped its forward progression, even though up until that point it had destroyed everything in its path. Then, as the priest walked boldly forward toward the wall of water with the banner in his upraised hand, that gigantic wave receded from him and turned away from the face of Mary to return placidly to the ocean.

An anniversary procession was established, along with a confraternity of Our Lady of the Palm. With the exception of 1837, when there was a Civil War, the procession was held annually. The rosary was recited along the route of the tidal wave, and prayers of thanksgiving said.

Return to Marian Calendar November from Our Lady of the Palm

Return to Titles of Mary from Our Lady of the Palm