Our Lady of the Mountains 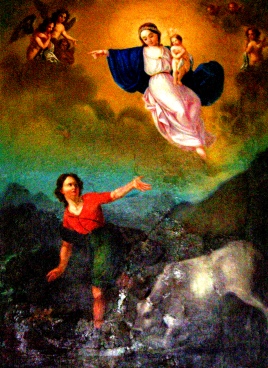 Also known as the Sanctuary of Our Lady of Polsi, or Sanctuary of Santa Maria di Polsi, Our Lady of the Mountain, it is located near San Luca in Calabria in Southern Italy. Until recently the sanctuary could only be reached on foot because of the rugged terrain and its location at the bottom of a gorge.

It is known that the site has been inhabited since pre-Roman times, as there were Hellenic settlers there who worshipped Persephone. Basilian monks had founded a hermitage there in the 7th century honoring the Blessed Mother, which was replaced by a Roman Catholic presence about the year 1500.

During the period from spring to October the area around the sacred shrine comes alive with a considerable number of pilgrims from all over the provinces of Calabria and neighboring provinces. Once near the sanctuary, however, you might still find shepherds grazing their flocks.

Our Lady of the Mountains

There is more than one legend about the founding of Our Lady of the Mountains. One of them is that in the ninth century there were Byzantine monks fleeing from the Saracen invasion. They made their way into the heart of the mountains where they founded a small colony and a church. Possibly due to the extreme distance to the nearest villages, the site was later abandoned.

Another, more widespread legend, tells that in the eleventh century a shepherd boy, a native from a nearby town, was intent on finding a lost bull. When he found it, he watched as the animal dug up an iron cross. Then he experienced a vision of the Blessed Virgin with the Christ Child, who said:

“I want you to build a church to spread devotion to me. I will grant graces, above all, to the devotees who will come here to visit me.”

Still within the sanctuary are kept the statue of Our Lady of the Mountains, a sculpture of great beauty, and the Holy Cross. The statue of the Blessed Virgin was carved in limestone, and is said to have eyes that follow the beholder. She and her Divine Son wear golden crowns that date from 1860, when the father superior of the Basilian convent, Domenico Fera, crowned the statues.

The celebrations that take place at the Sanctuary and their dates are:

August 22. On this date there is a procession from a nearby village to the shrine.

September 2: Day of the solemn feast of the Madonna of the Mountains.

September 14: Feast of the Holy Cross.

Every 25 years: Coronation of the statue of Our Lady of the Mountain – the last time was 2 September 2006.