Our Lady of the Miraculous Medal 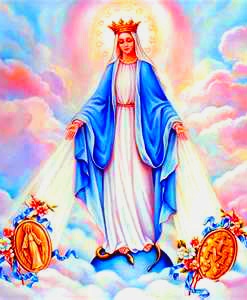 It was almost midnight, when Sister Laboure was awakened by someone calling her. She saw at the foot of her bed a beautiful child, beckoning her to follow; arriving at the chapel, she beheld Our Lady, who spoke to her for two hours.

On November 27, while the community was assembled for prayer, Mary came for a second visit. Her head was covered with a soft white veil, she stood on a ball on which was a serpent with crushed head. In her hands Our Lady held a small ball, the globe, with a tiny cross at its top, and offered it to God as she prayed. Upon her fingers were many rings, filled with precious stones of varied beauty and brilliancy. As rays of light shot forth from those stones, Our Lady lowered her eyes and spoke to Catherine Laboure:

“This ball which you see is the world; I am praying for it and for everyone in the world. The rays are the graces which I give to everyone who asks for them. But there are no rays for some of these stones; many people do not receive graces because they do not ask for them.”

Then Mary’s arms were lowered and she became brighter and lovelier; a group of words encircled her head:

“O Mary, conceived without sin, pray for us who have recourse to thee.”

And a voice said:

“Have a medal made according to this picture. All who wear it when it is blessed will receive many graces especially if they wear it suspended about their necks.”

The vision of Our Lady of the Miraculous Medal turned and showed the letter “M” surmounted by a cross with a crossbar beneath it; under the initial of the name Mary were the Sacred Hearts of Jesus and Mary: the first encircled by a crown of thorns; the second transfixed by a sword. Encircling the entire picture were 12 stars with a golden frame.

In December 1831, the third apparition repeated the request for the making of the medal of Our Lady of the Miraculous Medal. Sister Catherine told her superior and her confessor about Mary’s request. When Father Aladel told the archbishop, his Excellency said, “Have a medal made at once and send me some of the first made.” In June, 1832, the first 2,000 medals appeared. So many miracles were wrought by the use of the medal, that it was called “The Miraculous Medal.”

Six years later another desire of Our Blessed Mother’s was answered when an altar was constructed on the very spot where she appeared, in the Chapel of the Apparitions.

Sister Catherine Laboure died in 1876, December 31, and all felt she had gone directly to Heaven. On July 27, 1947, she was canonized by Pope Pius XII. When her casket was opened shortly before, her body looked as lovely as it did when she died fifty-six years before.

The Miraculous Medal and the account of the apparitions continued to inspire widespread devotion so that the Church deemed it fitting that the love of Mary manifested so generously and powerfully by the Miraculous Medal should not be over looked, and that the devotion to the Immaculate Conception should become worldwide. The Apostolic See, therefore, expressed its desire to have a special day set aside each year to celebrate the marvelous events attending Our Lady's apparition. Upon careful examination of all the facts, Leo XII proclaimed to the universal Church the "Feast of the Miraculous Medal" with a special Office and Mass.

The Miraculous Medal is a badge stating that the wearer has on ideal: the Blessed Virgin, and one ambition: to retain purity of soul throughout life by keeping that soul in the state of grace always. If you wear Mary’s Miraculous Medal and live for what it represents, you should be one of the happiest people in the world.

“O Mary, conceived without sin, pray for us who have recourse to thee!”

Our Lady of the Miraculous Medal

*from the Woman in Orbit and Mary's Book