Our Lady of the Holy Cross 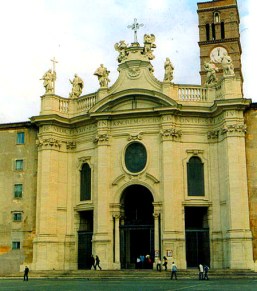 March 31: Our Lady of the Holy Cross

The Abbot Orsini wrote: “Our Lady of the Holy Cross, at Jerusalem, where is kept a part of Our Lady’s veil, given by Saint Helen.”

The Roman Basilica of the Holy Cross in Jerusalem, or Basilica de Santa Croce in Gerusalemme in Italian, is one of the seven Pilgrim Churches of Rome. The church dates back to about the year 320, when Saint Helena, the mother of the emperor Constantine, modified one of her rooms in the imperial palace to house the relics of the Passion of Christ that she had brought back to Rome from the Holy Land. Even though the church is located in Rome, it is said to be “at Jerusalem” due to the fact that the floor was covered with earth that had also been brought back from Jerusalem, meaning that the church was built upon the soil of Jerusalem.

Saint Helena travelled to the Holy Land in the year 326, founding churches at the places where Christ was born in Bethlehem, and from where he ascended into heaven. It shouldn’t seem so remarkable that Helena was able to find the holy places such as the Cenacle, for many of the buildings still stood. Then, as now, the buildings were constructed of stone, and so they could not burn, as wood would only be found in furniture, doors and windows. It was also under Helena’s direction that the Cenacle was purified, consecrated, and Mass said there once again. The Cenacle became the seat of the archbishop until the year 636 when the Arabs came with fire and sword.

Our Lady of the Holy Cross

Saint Helena's Chapel is partly underground, and here soil from Calvary was spread on the floor. The chapel was soon made into a basilica, which was then later restored by Pope Gregory II and again by Pope Lucius II.

There are many significant relics kept at the church, including pieces of the cross upon which Jesus suffered his Passion, two thorns from the Crown of Thorns, a piece of one of the nails that held Our Lord to the Cross. Other relics include a piece of the cross of the Good Thief, a bone from the finger of Saint Thomas that he had placed into the wound of Christ after His the Resurrection, and fragments of the pillar Christ was tied to when he was whipped, the Holy Sepulcher, the crib Jesus had used as a baby, and other fragments from the grotto where He had been born at Bethlehem. These relics can still be seen today.