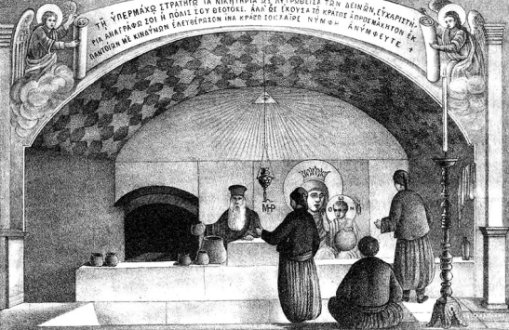 August 31: Our Lady of the Founders, Constantinople

The Abbot Orsini tells us the Empress Saint Pulcheria had this church built, and gave to it the girdle of Our Lady. A feast of this relic is kept at Constantinople, under the title of the Deposition of Our Lady’s girdle. The French having taken this city, this precious treasure was carried off by Nivellon, Bishop of Soissons, and placed in the celebrated abbey of Our Lady, with a portion of the veil of that Queen of heaven.

The Empress Saint Pulcheria lived in Constantinople in the 5th century, and she built many churches, hospitals and public houses for the destitute. She is responsible for at least three churches in Constantinople that were dedicated to the Blessed Virgin – the Blachemae, the Chalkoprateia, and the Hodegetria.

The Church of the Virgin of Blachernae, now known as the Church of Panagia of Blachernae, is located in Istanbul. It was once the most celebrated shrine in Constantinople, and lies inside the high walls of the city, only a short distance from the Golden Horn. The church was begun by the Empress Pulcheria, and completed by her husband, the emperor Marcian. It was built upon the site of what was thought to be a sacred spring, the waters of which are still thought to have therapeutic value. The Emperor Leo I made several additions, including the Hagai Soros, which was actually a small chapel next to the church where the Holy Robe and Girdle of the Blessed Virgin Mary were kept in a silver and gold reliquary. The relics had been brought from Palestine in 458.

In the year 911 AD it was reported that there was a Marian apparition at this church. The city was under siege by a large Muslim army, so the citizens of Constantinople had recourse to Mary, praying for relief at the Blachernae church. Very early one morning the Blessed Virgin, preceded by a host of angels, was seen to enter through the church doors, escorted by Saint John the Baptist and Saint John the Theologian. She advanced to the center of the church and knelt there to pray fervently with tears in her eyes. After a time she moved to the altar and continued praying before she removed Her veil and held it out over the faithful as She ascended back into heaven. This was seen as a sign that she was taking the city under her protection, and so it happened that the Christian’s won a striking victory over their enemies, who were driven off.

The city of Constantinople came under siege during the Fourth Crusade in the year 1203, and was captured in April of 1204. The Bishop Nivelon de Cherisy was one of the first men to scale the walls of mighty Constantinople when it was finally opened to the Crusaders. Despite the fact that there was a stern prohibition against plundering relics from churches and monasteries, many holy relics were obtained and brought back to the West. Bishop Conrad of Halberstadt, Abbot Martin of Pairis, and Nivelon of Soiccons were known to have taken relics. Nivelon of Soiccons enriched his cathedral at Soissons with several important relics. Robert of Clari later includes in a list of relics he viewed at the church of the Blessed Virgin of the Pharos (Lighthouse) the crown of thorns, the Virgin’s Robe, the head of John the Baptist, and two large pieces of the True Cross. The robe was a large portion of the sleeveless shirt worn by the Virgin Mary, as well as her girdle.