Our Lady of the Empress 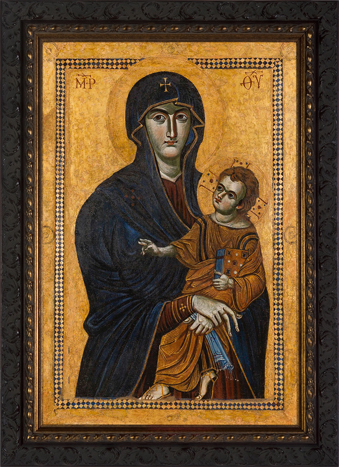 The Abbot Orsini wrote: “A tradition records that this image spoke to Saint Gregory the Great, in the year 593.”

Salus Populi Romani means literally health or salvation, or Protectress, of the Roman People. The title of Salus Populi Romani goes back to Emperor Constantine the Great and the Edict of Milan when, after Christians were no longer persecuted, the phrase became another of many Marian titles for the Blessed Virgin Mary, Mother of God.

The icon Salus Populi Romani, or Our Lady of the Empress, is one of many images believed to have been painted by Saint Luke. According to tradition, Saint John took in the Blessed Virgin after her Son had ascended into heaven. She had few personal belongings, but among them was a table built by Christ himself when He was working in the carpenter shop with his foster father, the good Saint Joseph. Saint Luke, yielding to the repeated requests of pious virgins, painted a portrait of Mary using the tabletop as his canvas. As the portrait was being painted, Saint Luke listened carefully as the Queen of Heaven spoke of her Son’s life, facts that Saint Luke recorded in what became his Gospel.

The image is surprisingly large, being five feet high by three and 3/4 –unless one considers that it was painted on a tabletop. Modern examiners admit the painting was made on a thick cedar board. The Virgin Mary holds a mappa in her right hand, which is an imperial symbol meant to depict the bearer as “Queen,” or in Roman times, "Empress."

The icon came to Rome from Crete in 590 when Pope Gregory the Great was pope, and according to tradition he went out upon the Tiber in his own vessel to greet the icon.

Our Lady of the Empress

Three years later, Pope Gregory I had the icon carried throughout Rome in solemn procession as all prayed to the Mother of God for an end to the Black Plague that had been devastating the people of Rome. Pope Gregory's predecessor, Pope Pelagius, had himself died of the same plague.

When the icon of Salus Populi Romani, with the prayerful entourage following alongside the Tiber River, neared Hadrian’s Mausoleum, a choir of angels could suddenly be heard singing the joyous Resurrection hymn as Pope Saint Gregory looked up to see the heavens open. Then, just above Hadrian’s Mausoleum, an angel believed to be Saint Michael appeared. He was holding a sword of vengeance over the city, and above him the pope saw the Blessed Virgin, seated upon a throne above the angels.

Meaning: “Queen of Heaven, rejoice, alleluia; for he whom you did merit to bear, alleluia; has risen as he said, alleluia; pray for us to God, alleluia.”

The scent of a heavenly perfume filled the air, and without hesitation the holy Pontiff concluded the Regina Coeli:

(Pray for us to God, alleluia! Rejoice and be glad, O Virgin Mary, alleluia! For the Lord has truly risen, alleluia!).

At that, the pope watched as Saint Michael sheathed his sword. To the great relief of the people of Rome, the plague was ended at that moment.

Since the year 1613, the icon Salus Populi Romani has been kept in the altar tabernacle of the Cappella Paolina that was created for it, known in English as the Lady Chapel. The basilica of Saint Mary Major, where it can be seen, is one of the four ancient churches of Rome and the Marian shrine is under the special patronage of the popes.