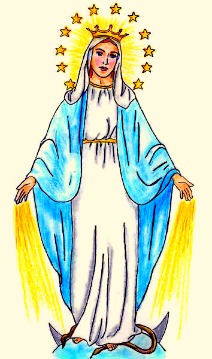 The Abbot Orsini wrote: “Our Lady of the Conception, at the Capuchin Convent of Donay, in Flanders, where is seen a picture of the Immaculate Conception, which was miraculously preserved from fire, in the year 1553.”

Donay, now known as Douai in France, was once considered a thriving and populous region of Flanders during the Middle Ages, markedly famous for its textile market. It is now a commune in northern France located on the Scarpe River 25 kilometers from Arras. The town of Douai is also known as Douay or Doway in the English language.

The county of Flanders became part of the domain of the Duke of Burgundy in the year 1384, and then in 1477 became a possession of the Habsburg’s. The town was taken by the French army and became a permanent part of France in the year 1668. During successive sieges in 1710 and 1712, the city was almost completely razed to the ground by the British Army.

The University of Douai was founded in 1562. There was a Benedictine priory founded at Douai in 1605. In the year 1609 a translation of the Old Testament was published there and combined with the recently published New Testament from Rheims to create the famous Douay-Rheims Bible that is still considered to be the standard for the complete Catholic Bible.

It is certain that the French Revolution played a great deal of havoc in the region, and the town was heavily damaged during both World Wars.

In Butler’s lives of the Saints, there is a reference to a John Woodcock, OFM, born in 1603. According to this history, he joined the English Franciscans at Douai and was clothed there in 1631. For some time he lived as a chaplain and confessor, and became a zealous worker on the English mission for many years but suffered from continual sickness and eventually retired to the convent at Douai. This is the only reference I could find to the existence of a Capuchin Convent at Donay at the time.

There is also mention of a Capuchin Monastery in the list of historical monuments of Douai, but other than the above, I can find no other information about this feast.