Our Lady of Tears 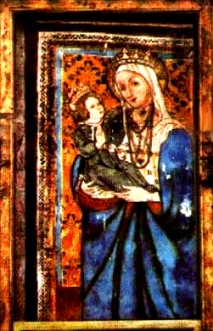 Also known as the Weeping Madonna of Syracuse, this plaster hanging wall plaque depicts the Immaculate Heart of Mary in the style of the 1950’s. Like many others just like it, it was mass-produced in a factory in Tuscany and shipped to various locations throughout the world.

This particular plaque of Our Lady of Tears was purchased for a wedding gift for a couple who wed on March 21st, 1953. The couple, Angelo and Antonian Iannuso, would later admit that they were not devout, but they liked the plaque and placed it on the wall over their bed. Antonian soon became pregnant, but the happy couple soon learned that the pregnancy caused Antonian to suffer from toxemia that caused frequent convulsions and even temporary blindness.

On the morning of 29 August, 1953, Antonian awoke to find that her sight had been restored.

“I opened my eyes and stared at the image of the Madonna above the bedhead. To my great amazement I saw that the effigy was weeping. I called my sister-in-law Grazie and my aunt, Antonian Sgarlata, who came to my side, showing them the tears. At first they thought it was an hallucination due to my illness, but when I insisted, they went close up to the plaque and could well see that tears were really falling from the eyes of the Madonna, and that some tears ran down her cheeks onto the bedhead. Taken by fright they took it out the front door, calling the neighbors, and they too confirmed the phenomenon…”

Our Lady of Tears

The plaque of Our Lady of Tears was publicly displayed, convincing even the skeptics of the prodigy as many of the sick were miraculously healed of their ailments. Some of the tears were collected for scientific examination, and the findings were as follows:

“…the liquid examined is shown to be made up of a watery solution of sodium chloride in which traces of protein and nuclei of a silver composition of excretiary substances of the quanternary type the same as found in the human secretions used as a comparison during the analysis.

“The appearance, the alkalinity and the composition induce one to consider the liquid examined analogous to human tears.”

On October 17, 1954, Pope Pius XII stated the following during a radio broadcast:

“…we acknowledge the unanimous declaration of the Episcopal Conference held in Sicily on the reality of that event. Will men understand the mysterious language of those tears?”

Photo from the book "Miraculous Images of Our Lady," by Joan Carroll Cruz -Copyright © 1993 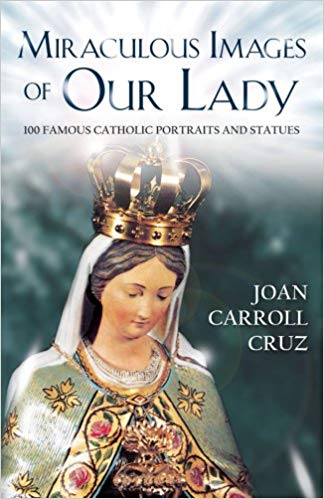 Best-selling writer Joan Carroll Cruz author of Prayers and Heavenly promises, The Incorruptibles, Secular Saints, Eucharistic Miracles has done her best work yet in Miraculous Images of Our Lady and its companion book, Miraculous Images of Our Lord (also published by TAN). For here are 100 true stories of Church-approved miraculous statues, paintings and other images of Our Lady from all parts of the globe and spanning almost 2,000 years. Included are images that have spoken, that have brought miraculous cures and other special favors, that have helped in the construction of Catholic churches, that have shed luminous rays leading to their discovery in hidden places, that have given off a celestial fragrance, or that have suddenly and unexplainably become extremely heavy so as to resists being moved from a favored place. Also described are images of Our Lady weeping blood and tears, or Our Lady lovingly holding the Infant Jesus, as well as the ornate and costly garments the faithful have created for those dear figures, plus the special feast days celebrated in their honor.

Ranging across Italy, France, the U.S., Japan, Mexico, etc., the stories shared by Mrs. Cruz tell of the images of Our Lady of Guadalupe, Akita, Pompeii, Prompt Succor (new Orleans), Our Lady of the Smile (through which St. Therese the Little Flower was cured at age 10), Our Lady of the Holy Rosary, The Comforter of the Afflicted, The Madonna of Consolation, Mother of Divine Love, Our Lady of Zapopan (Mexico) and many, many more! Scores of pictures make the book come alive.

Surely many readers of this amazing book will be inspired to go as pilgrims to venerate these beloved Marian images. All, however, will find renewed confidence in the Blessed Mother's maternal love and protection for her children as she has tenderly shown it over the centuries in these special Miraculous Images of Our Lady. This is a perfect book for the entire family and a great treasure for your home library!