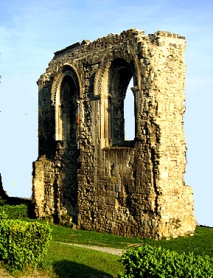 March 26: Our Lady of Soissons, France (1128), in the Abbey one of the shoes of Our Lady is believed to be preserved.

In the year 1128, a plague afflicted the city of Soissons. For six consecutive days the victims went to the shrine of Our Lady and called out to her for help. The Blessed Virgin Mary appeared to them, accompanied by heavenly hosts of angels. Immediately the people who witnessed the miracle and believed were healed. The Bishop asked all who were healed to make a novena of thanks and to kiss the slipper of the Holy Virgin kept in the church.

A rustic servant of one of the knights of Soissons, a man named Boso, came to the church for the festival which was to follow the novena. While his companions gave gifts and talked of the slipper of Our Lady, he gave nothing and scoffed at the idea, muttering, “You are very foolish to believe this to be the Virgin’s slipper. It would have rotted long ago.” At these words Boso’s blasphemous mouth was drawn toward his ear with such sharp pain that his eyes seemed to slip out of his head. A tumor appeared and covered his face, making it unfit for human use. Roaring and writhing, he threw himself before the altar of Mary, begging for help, as he had offended the Mother of God, and he knew there was no one else who could heal him.

The abbess, a woman named Mathilda, took the slipper and made the sign of the cross over the victim. Immediately he began to heal. The punished scoffer repented and gave himself up to the service of the Church of Soissons. Many – the lame, the blind, the deaf, the dumb, the paralytics, were healed at the shrine.

The Abbey was once the largest in France, famous for its rich collection of relics, including the “Lady Slipper,” but all that remains today of the abbey is a ruined wall with two arches, as the rest was methodically razed by the eager hands of the devotees of the French Revolution.