Our Lady of Seez 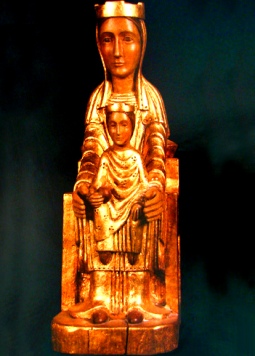 Saint Latuin built the first cathedral to Our Lady in the diocese of Seez. If this can be accepted as true, then the original cathedral would date back to the middle of the 5th century. A later church replaced it; one dedicated under the title of Notre Dame du Vivier. The Normans at the beginning of the 5th century destroyed this structure. A third church was built, a hundred meters away on the site of a pagan temple. This one had added to it the names of the martyrs Saints Fervais and Protase, whose relics were enshrined in it. A special chapel in the cathedral recalled the memory of the first cathedral dedicated to Our Lady of Seez, for Mary remained the principal patroness of the diocese.

Many famous people made pilgrimages to Our Lady of Seez; among them were Saint Germain, Bishop of Paris; Saint Evroult, founder of the Abbey of Ouche; Saint Osmond, Count of Seez, who became Bishop of Salisbury; Saint Thierry, Abbot of Saint Evroult; Saint Louis IX was there in 1259; and about the same time Blessed Giles, one of the early companions of Saint Francis came to recommend to Mary’s protection the first French convent of Franciscans, which he was going to found at Seez. The Augustinian served the sanctuary from 1127.

Our Lady of Seez

Mary rewarded the prelates for their zeal in promoting her honor by granting all of them the grace of martyrdom in the violent persecution that broke out in 1792.

The beautiful façade of the cathedral was destroyed in 1795. A revolutionary bought the debris with the intent of building a house from it. Two attempts proved failures and he finally gave up the attempt.

Return to Marian Calendar December from Our Lady of Seez

Return to Titles of Mary from Our Lady of Seez

Return to Roman Catholic Saints from Our Lady of Seez