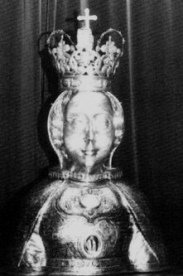 Mary was born into a wealthy family. Very early in life she felt the call to the consecrated life. According to tradition the beginning of her conversion came about due to her contemplation of the Cross and Passion of Christ. Meditating on the Passion one day she was so moved to tears that her steps in church might be traced by the copious drops that fell on the paves. Many who observed her also felt moved to devotion, reading in her countenance as in a book the unction of the Holy Ghost.

Despite her wishes, Mary’s parents desired for her to marry and arranged a marriage for her at the age of 14. Mary was obedient, but convinced her husband, John, to live chastely with her as brother and sister. They gave what they had to the poor, and for many years she and her husband served lepers in a hospital at Willenbrouch near Nivelle.

Mary was greatly devoted to Our Lady of Oegnies and Saint John the Evangelist, and was a friend to a woman known as Christina the Astonishing, a remarkable woman who truly merited her name. Having apparently died while in her early 20’s, Christina came back to life and levitated from her casket during her funeral ceremony to tell those present that God had shown her Heaven, Hell and Purgatory, and that she had returned to do penance for the relief of the dead and the conversion of sinners. These penances included casting herself into furnaces from which she would later emerge unharmed, and allowing wild dogs to tear and rend her flesh until she was covered with her own blood, only then to immediately heal with no trace of wound or scar.

Eventually unable to bear the frequent attention of devotees, Mary and her husband felt it God’s will that they should separate to live contemplative lives. Mary retired to a hermitage of Saint Nicholas in Oignies, near Namur. There she prayed for the souls in Purgatory, and gave spiritual advise to the disciples who gathered around her, among them James of Viry. She practiced asceticism worthy of the Desert Fathers, and was privileged to have mystical ecstasies and visions, mainly of Saint John and her guardian angel. Mary also continued to care for lepers.

Three days before she died, Mary began to sing in ecstatic strains in the Romance language concerning the Trinity, the Humanity of Christ, the Virgin and the Saints. She sang as if the sentences with their rhythm were written before her. She said, greatly rejoicing at it, that the Holy Spirit would soon visit His Church, and send laborers more abundantly than usual into the harvest. 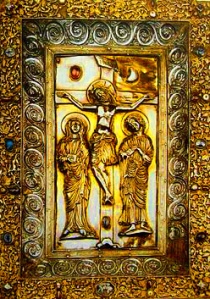 There is the so-called Treasure of Oignies, which consists of thirty reliquaries, crosses, and other precious items dating from the 13th century, and together they are considered one of the Seven Wonders of Belgium. The Treasure of Oignies is the work of an exceptional jeweler, brother Hugo d’Oignies, and is one of the most important heritage treasures with which Belgium is enriched. Made in the priory of Oignies-sur-Sambre between the years 1228 and 1238, they escaped as by miracle from the French revolutionaries who destroyed the monastery in the year 1796.