Our Lady of Miracles
Paris 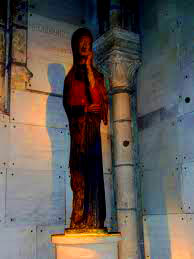 The Abbot Orsini wrote: “Our Lady of Miracles, in the cloister of Saint Maur des Fosses, near Paris. It is said that this image was found made, when the sculptor, named Rumold, was going to work at it.”

Saint-Maur-des-Fosses is a city that may be considered to be a suburb of Paris, France. There is a miraculous statue of the Blessed Virgin, Our Lady of Miracles, located in the church of Saint Nicholas in the city. The place owes its name to an abbey that was founded by Queen Nanthild in the year 638 at Les Fosses, which means ‘the moats’ in French. The abbey was called Sanctus Petrus Fossatensis, and was dedicated to the Blessed Virgin Mary, as well as saints Peter and Paul. When the monks of the abbey of Saint-Maur de Glanfeuil in western France fled from the Vikings in the year 868, Holy Roman Emperor King Charles the Bald asked them to settle at Sanctus Petrus Fossatensis. They did so, bringing with them their relic of Saint Maurus, and introducing the rule of Saint Benedict to France in the 6th century.

Our Lady of Miracles Paris

The abbey, located in a loop of the Marne just before it joined the Seine, became an important pilgrimage site when the relics of Saint Maurus were found to be effective in healing those who suffered from gout and epilepsy. Due to this sudden popularity, and in recognition of it, the name of the abbey was changed to Saint-Maur-des-Fosses, or St. Maurus of the Moats. In the draught year of 1137, all of Western Europe was without rain. The monks of the abbey led a procession of the relics of St. Maurus, and at the conclusion of Mass there was a violent thunderstorm which brought rain to the region.

As should not be surprising, the abbey was seized during the French Revolution by the enthusiastic proponents of liberty, equality, and brotherhood. Anything of value was looted, and the property then sold to speculators. After they were stripped of everything of value, the buildings that remained were demolished and the material used in other building projects, so that today nothing remains but a few vestiges that were collected for display in a museum.

Fortunately, the miraculous statue of Our Lady of Miracles miraculously survived. The statue had been venerated since 1328 because of the miraculous circumstances of its creation, and was saved by a locksmith named Hazar. It is now kept at the church of Saint Nicholas in Saint Maur des Fosses.