Our Lady of Mantua 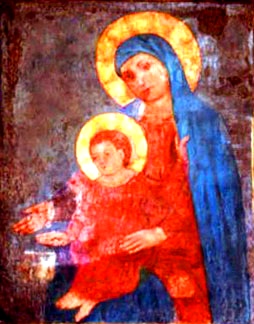 This present shrine to Our Lady of Mantua was built by the Gonzaga family in the year 1460. There is seen a miraculous painting of the Blessed Virgin Mary holding the baby Jesus that is known to have been venerated since about the year 1000. Originally known as Saint Mary of the Vows, the painting is crowned today.

According to tradition, the history of the site dates back to Saint Anselm. At that time the Blessed Virgin had promised her protection for the city. Starting in 1477, word spread that before the image numerous miracles had occurred, so that by then substantial offerings began to pour into the church (hence the name of Santa Maria dei Voti).

After the plague of 1630, which had overwhelmed the city and its territory, the princess Maria Gonzaga, regent of the duchy, wanted to entrust herself, her dynasty, and the state to the protection of the Blessed Virgin. The princess was determined to place herself, her son Charles II and the states of Mantua and of Monferrate under the special protection of Mary. She ordered that the image of Mary should be carried in procession through the streets of the city, and desired that the image be solemnly crowned in the Basilica of Saint Andrea, as the Queen of Mantua.

Our Lady of Mantua

The solemn crowning of Our Lady commonly called Santa Maria dei Voti was strongly urged by the pious princess Maria Gonzaga in the year 1640, when the dam of the Po River in Italy broke. The coronation took place with great solemnity on November 28, 1640.

Since then, the church and the picture painted of Santa Maria dei Voti were named dell’Incoronata, or ‘Saint Mary the Crowned,’ and the annual festival was fixed on the first Sunday after the feast of Saint Martin, November 11. On this occasion, but also during the month of May, which is traditionally dedicated to Marian devotion, the dell’Incoronata is exposed in the cathedral, covered in sumptuous dresses dating from the seventeenth century.

The three following centenary years in particular saw an unanimous and grateful expression of love on the part of the Mantuans, who still venerate the Madonna “Incoronata,” the Madonna who said, “Mantua is mine, and as mine I will always defend it.”