Our Lady of Lyons 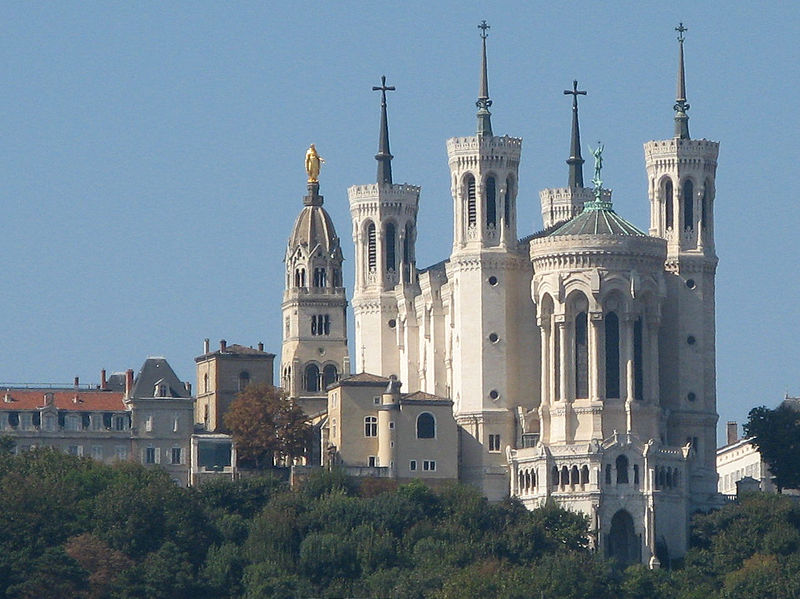 In about the year 150 AD, Saint Pothinus, the Apostle of Gaul and first bishop of Lyon, is said to have enshrined a picture of Our Lady in an underground chapel which is now beneath the church of Saint Nazaire, or Nizier, in Lyons where many Christians suffered death in the Old Forum on the Hill of Blood.

According to tradition, there was once a temple to Attis on the site, whose followers precipitated a persecution against the Christians in about the year 177 AD. Later, in the 5th century, a basilica was built on the site, and the remains of many Christian martyrs from that persecution were buried there, as well as the bishops of Lyon. The church takes its name from Nicetius of Lyon, who was the 28th bishop there in the 6th century, due to the numerous miracles that occurred there after his burial.

In 1168 the Canons of the Cathedral started building a larger church over the shrine. In thanksgiving for the cure of his son by this Saint, King Louis VII of France made a pilgrimage to Lyons, where he had an ex-veto tablet set up before the shrine of Our Lady. In 1466 King Louis XI founded a daily Mass in perpetuity, to be followed always by the Salve Regina, solemnly sung.

Our Lady of Lyons

In 1643, the bubonic plague swept across Europe. The people of Lyon dedicated their city to Our Lady and consecrated themselves to Our Lady of Fourviere, pledging to make a solemn procession on September 8th of each year in thanksgiving for the end of the epidemic. Instantly, all traces of the plague vanished and, until 1792, twenty-five Masses were said daily in thanksgiving. The annual procession continues even to this day, with the participation of the mayor of Lyons or one of his representatives. On that day, the people make a present to the Virgin of a seven-pound candle and a gold coin.

During the years of the French Revolution the sanctuary was profaned and the church used as a warehouse. Sometimes pilgrims would still come to visit the shrine at night under peril of their lives.

In 1805, Pope Pius VII himself presided at the opening or re-opening of the shrine. Shortly before the battle of Waterloo, the shrine was threatened with destruction when Napoleon wanted the hillside fortified. The Marshall was given the order to demolish the shrine, but he refused to do so.

Because the city was spared many vicissitudes during the revolutions of 1830 and 1848, the people of Lyons decided to show their gratitude by adding a tall tower to the church surmounted by a great bronze figure of Our Lady. The inauguration of the renovated church and tower was scheduled for September 8, 1852, but the date was moved to December 8th because of heavy flooding. Even then, the festivities and fireworks planned for the celebration had to be cancelled due to heavy rains. The citizens of Lyons, undismayed, put lanterns on their windowsills as a sign of their devotion. This episode is the origin of the street illuminations now observed on December 8th, and has become part of the annual tradition. On this day, the faithful put candles or lanterns in their windows and make the pilgrimage up the hill to the basilica by candlelight or flashlight, called the Fête des Lumieres, or the “festival of lights.”

The Virgin is also credited with saving the city from a Cholera epidemic in 1832 and from Prussian invasion in 1870. During the Franco-Prussian War, Prussian forces, having taken Paris, were progressing south toward Lyon. Their pause and inexplicable retreat were attributed by the Church to the intercession of the Virgin Mary.

After the Franco-Prussian war of 1870, a vast basilica to Our Lady was built next to the old shrine, which remained almost untouched. The crypt of Saint Pothinus, under the choir of the church of St. Nazaire, was completely destroyed in 1884.