Our Lady of La Guarde 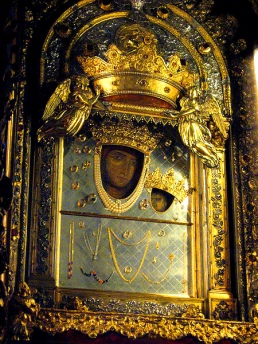 The Abbot Orsini wrote: “This picture was in the Church of Santa Sophia, at Constantinople, with this inscription: “This picture, painted by Saint Luke, must be taken to the mountain of La Garde, and placed over the altar of the church.” A Greek monk set out for Italy about the year 433, with the picture entrusted to him, and deposited it on the mountain of La Garde.”

The account mentioned by the abbot above is also told in the chronicle of Graziolo Accarisi, who wrote of a Greek hermit who went on pilgrimage to Constantinople where he received from the priests of the church of Santa Sofia the icon of Our Lady of La Guarde. This image was attributed to Saint Luke the Evangelist, and there was an inscription on the painting itself that it should one day be taken to the “mountain of the guard.”

The hermit took the icon, and walked throughout Italy in search of the place where the icon was meant to be, but it was not until he reached the city of Emilia near Bologna that the authorities of the city came out to greet him and processed with the icon back to the mountain. The icon had finally found its home, and it is now more commonly known as the Madonna of San Luca.

Our Lady of La Guarde

Among the many miracles attributed to the image is especially noted the “miracle of the rain,” which occurred on July 5th, 1433. An extremely heavy spring rain came late in the season, threatening to destroy the crops. Facing the prospect of famine, the people turned to the Blessed Virgin for assistance. The storm and rain stopped suddenly with the arrival into the city of a procession carrying the miraculous icon. Since that time these processions have been repeated annually. There is even an incredible arched walkway that is only a little short of four kilometers on length that is meant to protect the icon from the elements, as well as those on procession.

The icon shows the Blessed Virgin Mary holding the Infant Jesus in blessing. She wears a blue-green robe, with a red tunic. The nose, eyes and fingers appear somewhat elongated. The Divine Child wears a tunic of the same color as His mothers’, with his right hand in a gesture of giving a blessing, and his left hand being closed. In 1625 the image was covered with a silver panel which leaves only the faces of the figures uncovered.

The icon was crowned in 1603 by the Archbishop Alfonso Paleotti. The sanctuary of Saint Luke, where the icon is kept, was declared a national monument in the year 1874. In 1907 the church was raised to the dignity of a minor basilica by the holy Pope Saint Pius X.