Our Lady of La Chapelle 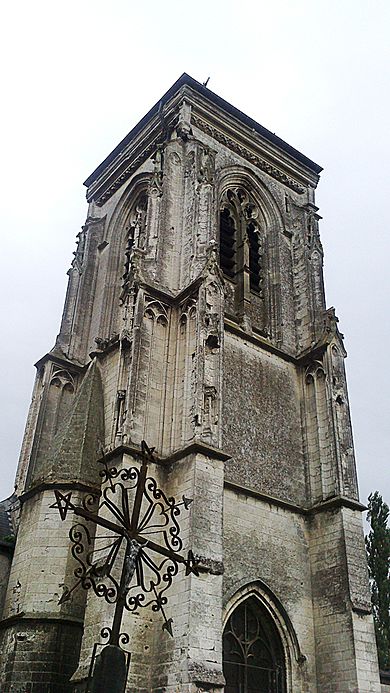 The Abbot Orsini wrote: “This church was built about the year 1400, on a small hill, where formerly they worshipped idols.”

The town of Abbeville is a commune located in the Somme department in Picardy in the northern region of France. It is located on the Somme River.

Fortunately for us, there still exists today a plan for the town of Abbeville that was etched in the year 1653. Our Lady of La Chapelle can easily be distinguished in the foreground of the etching, dominating the city though built outside the walls.

Built around the year 1400, the church was initially only a chapel in which there was exhibited a religious icon of our Lady that earned the church its name of Our Lady of the Chapel. The structure was indeed erected on the remains of a temple devoted to paganism. The growing number of the faithful coming to pray there made it a true parish, and so the church expanded to have 3 naves and 7 altars, reflecting the expansion of the city.

The church was built in limestone in the flamboyant Gothic style. It survived numerous dangers and setbacks over the coming decades, exposed to wind and rough weather at the top of the hill on the north of the city, including being struck several times by lightning. In 1619, the high Bell Tower did not survive a violent storm, and was rebuilt the following year.

All of this is nothing compared to the danger that the church faced in 1637-1638. At that time Spain and France were at war. King Louis XIII came to Abbeville, a strategic town, and realized that the chapel could serve as a type of fortress in case of a siege. Aware of the danger, Cardinal Richelieu gave the order to demolish the church. The mayor at the time, Guilaume Sanson, and his aldermen as well, managed to talk him out of it.

The church was saved, but for how long?

Then, in 1789, came the French Revolution. The church that had survived so much was destroyed in 1794.

Yet, in 1804, another large chapel was built to replace the lost church, a building retaining the tower of 1620. (That bell tower has been classified as an historic monument since 1901.

The cemetery that once surrounded the church was preserved, and has been significantly expanded to become the cemetery of the city since the year 1844. There is a path that leads up to the main entrance of the chapel through the cemetery that once connected to the three possession of the Templars: The Charterhouse of Thuyson, a house founded and occupied by the Templars and bought by the Carthusians, and the commandery of Beauvoir and Forest l'Abbaye. The road was called the "Way of the Templars."

Our Lady of La Chapelle

“My dear Son, as the Lord of virtues and graces, exalted and adorned me with them from the first moment of my Immaculate Conception. And as, more-over, the hindrance of sin touched me not, I was free from the impediments which prevented other mortals from entering into the eternal gates of heaven; on the contrary the powerful arm of my Son acted with me as being the Mistress of all virtues and as the Queen of heaven. Because He was to vest Himself and assume unto Himself human nature from my flesh and blood, He was beforehand in preparing me and making me like Himself in purity and exemption from fault and in other divine gifts and privileges. As I was not a slave of sin, I exercised the virtues not as a subject, but as a Mistress, without contradiction, but with sovereignty, not like the children of Adam, but like the Son of God, who was also my Son.”

*from The City of God by Venerable Mary of Agreda