Our Lady of Knock 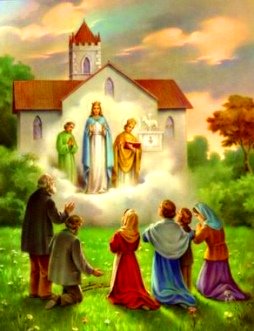 The apparition in County Mayo in Ireland of Our Lady of Knock is reported to have occurred on the evening of August 21, 1879, the vigil of the octave of the feast of the Assumption. Those who witnessed the miracle ranged in age from five years old to seventy-five.

The apparition was described as follows: “Our Lady was wearing a large, brilliant crown and clothed in white garments. On her right was Saint Joseph, his head inclined toward her and on her left Saint John the Evangelist. To the left of Saint John was an altar on which stood a cross and a lamb.” Standing only a few feet off the ground, the Blessed Virgin wore a white cloak and was described by witnesses as being incredibly beautiful. She wore a bright golden crown, and appeared to be praying with her eyes looking toward heaven with her arms bend in front of her with her palms facing inward.

Our Lady of Knock

Fifteen parishioners stood to witness the apparition for two hours as they recited the rosary. Although it was daylight when the apparition began, the weather turned for the worse and it began to rain heavily. The area around the apparition appeared unaffected, however, as the ground remained dry as long as the vision lasted. She did not speak, but the gable of the church where the manifestation was made was covered with a cloud of light.

Saint Joseph, the foster-father of Jesus, also wore white robes and stood on the Virgin’s right. He inclined his head respectfully toward the Blessed Virgin. Saint John the Evangelist wore a miter, and appeared to be preaching as he held a book in his left hand.

Since then thousands of people have gone to Knock to pray to Our Lady. Their prayerful, penitential and reverential spirit has been commended again and again by visitors from other lands. No sign of commercialism detracts from the purely religious atmosphere of that hallowed spot. People from all walks of life kneel in humble supplication before the shrine of Our Lady, fully confident that she has sanctified that spot by her apparition.

Organized pilgrimages from various dioceses are conducted frequently to the shrine of Our Lady of Knock. The rosary comprises the main portion of the devotion; the shrine is therefore appropriately called the Rosary Shrine. The “Knock Shrine Annual” relates many interesting stories of cures and conversions effected at the shrine.

Return to Marian Calendar August from Our Lady of Knock

Return to Titles of Mary from Our Lady of Knock