Our Lady of Kiev 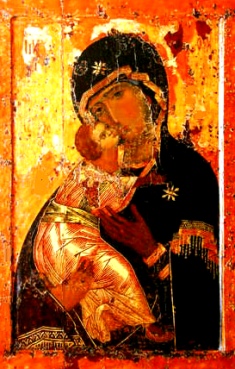 "Where there is a large image in alabaster, which spoke to St. Hyacinth, in the year 1241, and told him not to abandon it to the enemy who was besieging the city, but to carry it off with him, which he did without any difficulty, the image having lost its weight."

Around 862, a band of Norsemen settled in Novgorod and organized the Slavs of that region into an independent state – the nucleus of the future Russia. Kiev, about 20 years later, became the capital. By the end of the ninth century, missionaries from Constantinople had converted many of the inhabitants to Christianity.

During the three succeeding centuries, Kiev become the intellectual and religious center of the country, and numerous convents and monasteries arose in Kiev and the surrounding territory. One of these was staffed by the Dominicans. To it there came in the early years of the thirteenth century a Dominican Father by the name of Hyacinth – Saint Hyacinth, the Apostle of the North; also Apostle of Poland and Russia. Hyacinth had a burning ambition to convert the pagans and infidels of China, Mongolia, and outer Russia (the Tartans), to the Christian faith. In this dedicated task he made numerous journeys, mostly by foot, into the far countries lying beyond Kiev. Between these travels he rested and recuperated at the Dominican House at Kiev.

Our Lady of Kiev

During one of these rest periods (1240), word came to the monastery that the Mongols had invaded the country. They had marched across the Caucasus, swept over central and southern Russia, and now Kiev itself was in imminent danger of attack by the pagan hordes. Saint Hyacinth, on hearing the tragic news, rushed to the nearby church to save the Blessed Sacrament from capture and desecration.

Hyacinth had removed the Sacred Host from the Tabernacle and was hurrying down the aisle when he heard a voice call out, “Hyacinth, are you going to leave me here at the mercy of the Tartans?” The voice seemed to be coming from the statue of the Blessed Virgin on one of the side altars. Hyacinth stopped and turned his gaze toward the statue which was of alabaster, fairly large in size, and obviously much too weighty for one man to carry. What should he do?

Eighty years later after the Mongols had been driven away, the statue was returned to Kiev. That city became the center of great devotion to the Blessed Virgin, and it was natural that people soon gave the statue the name of Our Lady of Kiev.

The statue was later taken to a Dominican convent in Lwow in Poland. What has happened to it since the Communists took over Poland is unknown. But surely, Our Lady still pleads to each of us, “Take me with you; I will make the burden light.” She will always make all our burdens light and bearable, as long as we keep her with us always and everywhere.

*from The Woman in Orbit.

A visitor to this site has happily added a correction to this story, as the icon, known as The Virgin of Kyiv, is now in the Tretyakov Gallery in Moscow. It is a treasure of the Ukrainian cultural heritage. Clike here to see the article.

Return to Marian Calendar August from Our Lady of Kiev

Return to Titles of Mary from Our Lady of Kiev