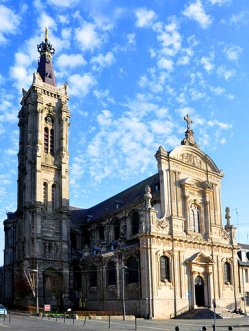 The Abbot Orsini writes: “Dedication of Our Lady of Flines, near Douay, by Peter, Archbishop of Rheims, in the year 1279. This abbey of nuns, of the order of Citeaux, was given to Saint Bernard by Margaret de Dampierre, in the year 1234.”

Margaret de Dampiere, also known as Margaret of Constantinople, was a relative of the Count Guy de Dampier. It appears that Saint Bernard had recently established an order of nuns according to the rule of his order, and in the year 1234 Margaret presented Saint Bernard with the abbey located near Douay.

Five years previous to this, Archbishop Peter of Rheims had dedicated the shrine to Our Lady of Flines. This shrine became a place of pilgrimage as a result of the miraculous cure of a child protégé of Margaret’s. The little one, unseen by Margaret’s coachman, had been seriously injured while playing about the stable-yard. The doctors pronounced her hopelessly lame for life.

Margaret, however, was confident in Our Lady’s intercession, and took the child to the neighboring shrine every Saturday and begged the Mother of God to be merciful to the child as well as to the grieving parents. After the fifteenth visit, the little girl, with a happy cry, jumped from the arms of her mother. “I can walk straight, see?” and proved that Our Lady had indeed cured her in that instant.

When Margaret de Dampiere died in 1280, she was buried in the middle of the choir.

The renown of the shrine continued to spread over time, and many pilgrimages to Our Lady of Flines was the result. The Blessed Virgin Mary proved the words of her loyal son Saint Bernard, “Never was it known that anyone who fled to thy protection, implored thy help, or sought thine intercession was left unaided” to be true.

The abbey was destroyed by the partisans of the French Revolution, and there is now no trace of the once thriving abbey.