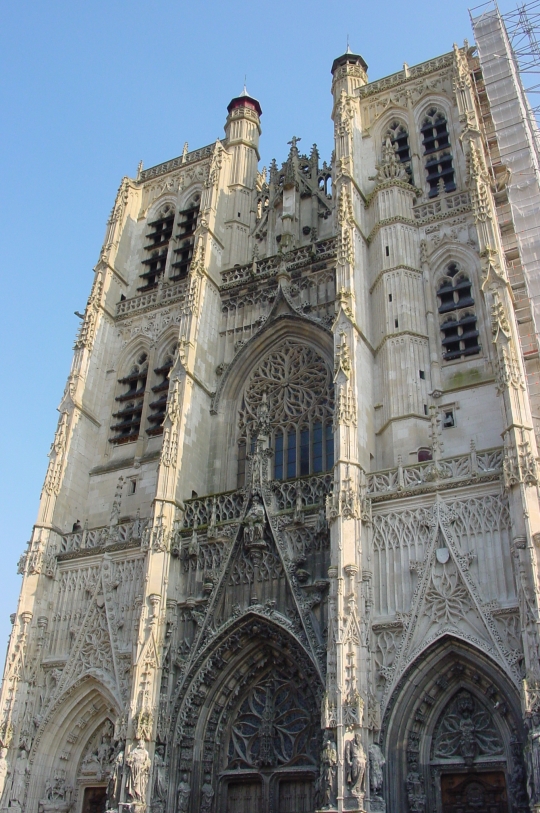 The shrine to Our Lady of Emminont, or Notre-Dame D’Emminont, is near Abbeville in France. It is much visited by pilgrims devoted to the Mother of God who at their prayers and petitions still performs for her people many miracles.

Franciscan Brothers, well-versed in wood carving, care for the shrine. They were consulted in 1510 concerning work on the Cathedral of Amiens. In richness of detail, Abbeville surpasses many other cathedrals. The nave was built between the years 1488 to 1539, and the small choir between 1661 and 1663. The construction was paid for by the King of France, and Count of Ponthieu, and the faithful of Abbeville. The church is much smaller than it was originally intended to be, as the initial blueprint for the church was never completed. The nave is quite short, has only two bays, and the choir is extremely small. Still, the façade is a superb masterpiece of the flamboyant Gothic style.

During the French Revolution the Church of Saint Wulfram was profaned and given the name of a “Temple of Reason” by the unreasoning revolutionaries who sought to destroy the immutable God by demolishing priceless monuments and artifacts, and even the glory of their own history.

The town of Abbeville was heavily bombed by the German’s during World War II, so that much of what is seen there today is of fairly modern origin. The church was also damaged, but efforts were made to restore the church to its former grandeur.

The list of favors granted by Our Lady of Emminont is indeed innumerable. It includes miraculous cures, astounding spiritual and temporal favors and streams of graces and blessings.

*from The Woman in Orbit and other sources, photo Wikipedia