Our Lady of Chievres 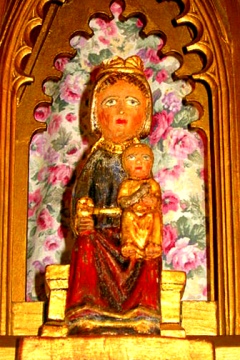 The Abbot Orsini wrote: “Our Lady of Chieves, in Hainault, where, in the year 1130, the lady of the place, named Ida, had a chapel built near a fountain where an image of Our Lady had been found, which has since wrought many miracles.”

Known today as Notre-Dame de la Fontaine, or Our Lady of the Fountain, the chapel is located in a town named “Chievres,” (and not Chieves). A short distance from the town of Ath, the town of Chievres is located in the municipality of Wallon in the province of Hainaut in Belgium. In 2006 the total population was only 6,198. There is also a United States Air Base located nearby.

Sometime in the early part of the 12th century, near the church of Chievres, there was an elderberry tree located next to a spring that held a statue of the Blessed Virgin Mary. It was probably one of the roadside shrines that existed all over Europe at that time. A young woman named Eva de Chievres (also spelled Eve, Ide, or Ida) decided to have a chapel built to house the statue and protect it from the weather.

Our Lady of Chievres

It is interesting to note that Eva married a famous knight named Gilles de Chin. According to legend, the Blessed Virgin assisted this knight in slaying a dragon that was terrorizing the land around nearby Wasmes. Gilles was accidentally killed while contesting in a tournament in 1137, and Eva later retired to the abbey of Ghislenghien where she died at age 65.

The shrine Eva founded was originally known as Notre-Dame du Sehu, or Our Lady of the Elder, but it eventually became better known for the fountain located nearby, and thus became known as Notre-Dame de la Fontaine. The shrine was famous as a place of pilgrimage due to the numerous miraculous healings there, and was also a “chapel of respite” where stillborn babies were sometimes miraculously brought back to life long enough that they might be baptized and go to heaven.

Among the many miracles noted there, in the year 1315 a Norman pilgrim was cured of gout, an illness from which he was suffering in all his joints. He paid for the rebuilding of the chapel, and also to have another constructed in his homeland to honor Our Lady of Chievres. In the year 1568 there was another Norman by the name of Antoine Depres, who had come to Belgium for a lengthy hospital treatment which he hoped would be a remedy for the skin disease afflicting his legs. He was completely cured after visiting Our Lady of Chievres. The Archbishop of Cambrai conducted a rigorous investigation and proclaimed the cure miraculous the following year. In 1579 there was a man named Nicolas Lens who suffered from a contraction of his muscles or nerves so that his legs remained continually drawn up to his chest. Appearing before the statue of Our Lady, Nicholas’ limbs were suddenly loosened and he ran to kneel before the image of Our Lady. In the years that followed he never failed to carry the processional cross while barefoot to give thanks to Mary and Our Lord for the miracle.

The chapel was rebuilt several times over the centuries, and in 1632 a well was made in its center that drew water from the spring.

The chapel was destroyed in 1789 as a result of the French Revolution. The statue of Our Lady was later found in the ruins and preserved in the church of Chievres. In 1893 Father Victor Duray organized construction of the present red brick chapel. In the present day there is a procession which takes place on the Sunday after Ascension Thursday. The statue of Our Lady of Chievres is carried in a beautiful Gothic-style litter.

Prayer to Our Lady of Chievres:

You are the fountain of pure water

In which rests the Holy Spirit.

Give us to be silent,

And hear the call of God,

To accomplish His Holy will.

You are the fountain of grace

From which your children draw.

Do increase our little faith,

Today as in the past,

Save us from all danger,

And to our patients, give health.

You are the Fountain of Wisdom

From which pilgrims drink their fill.

Let us taste the Gospels

Open our hearts to forgiveness

Turn our eyes toward Heaven.

We have every confidence in you.