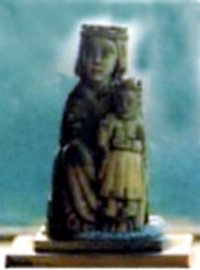 August 30: Our Lady of Carquere, Portugal

According to tradition, Our Lady of Carquere, on the river Douro in Portugal, is associated with the miraculous healing of Prince Afonso Henriques, who was to become the first King of Portugal.

Prince Afonso Henriques had been born a cripple, paralyzed from the knees down. The knight Egas de Monis was chosen to be the governor of Prince Afonso, as at that time children of nobility were given personal tutors to educate and accompany the child throughout their lives. Monis, himself from one of the most prominent families of the region, was also a man of faith, and had a great deal of pity for the young prince. He prayed fervently for his charge, seeking the intercession of the Blessed Virgin that the boy’s legs might be straightened through her intercession. His prayers were answered, and his holy intention perfectly fulfilled.

One night in about the year 1113, when the prince was four years old, Egas de Monis put him to bed and fell asleep himself. Our Lady appeared and wakened the governor, asking: “Are you asleep?”

The governor replied: “Lady, who are you?”

“I am the Virgin Mary,” she replied, and commanded the governor to go to a particular place in the hills above the Douro River that she indicated to him. “There dig, and you will find a church that, in another time, was started in my name, and you will also find an image of me. Thou shalt place the child overnight on the altar, and he will be cured and made well, because my son wants him to destroy many enemies of the faith.”

The Governor, comforted and joyful after the apparition, was a man who truly loved his lord. Trusting in God, whom he knew could give the boy strength and vigor, the knight sought out the ruined chapel and found it and the small stone image just as the Blessed Virgin had said. Later, when everything was ready, accompanied by the Queen and her entourage, he carried the young prince to the ancient chapel, intending to place him on the altar to spend the night with him in vigil.

Instead, after entering the chapel, the entire entourage fell into a mysterious sleep, excepting the prince, who remained wide awake. The boy sat for a time and watched the candles on the altar burning, and at one point observed that one of them was leaning dangerously. Finally, it fell over and started a fire. Prince Afonso was unable to awaken his mother or his governor, and so climbed up to the altar and put out the fire himself. It was then that he realized he had been cured, and began jumping for sheer joy when he awakened the whole entourage, who gave thanks to Our Lady for the miracle she had granted.

Now, the knight Egas Monis gave praises to God and His Blessed Mother, for he would be able to train the prince to ride and in the use of arms so that he might become a great warrior, as God desired. He had a new church built there which became famous as the location of the “Miracle of Carquere.”

The miraculous statue of Our Lady of Carquere is carved in ivory and is only 29 millimeters tall, and is assumed to date from the time of the Visigoths. The sculpture depicts the Blessed Mother with the Divine Child sitting on her knee. The Child holds a book in his left hand, and gives his blessing with his right. Perhaps the precious statue was worn by a Catholic warrior, and lost in a battle against the Moors, or was hidden during the time of the Muslim invasion of the Iberian Peninsula to protect it from desecration.

The Church of Our Lady of Carquere, or Santa Maria de Carquere, can still be visited in Spain.