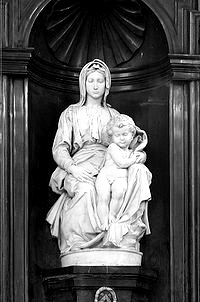 At a shrine in Flanders, dedicated to Mary, it is reported that a lock of Our Lady’s hair is preserved, given by a Syrian bishop, named Mocca.

This shrine is likewise said to have its famous relic of the Holy Blood, which is the center of much pilgrimage. The precious relic was brought from Palestine by Thierry of Alsace on his return from the second crusade. From 1150 this relic has been venerated with much devotion. The annual pilgrimage attended by the nobility in their quaint robes takes place on the Monday following the first Sunday in May. Not only the Flemish nobility take part, but also thousands of pilgrims from all over Christendom.

Every Friday the relic is less solemnly exposed for the veneration of the Faithful. As mentioned above, the shrine is dedicated to Mary, for it was she who gave her own blood to her Divine Son, the God-Man.

As at all the Marian shrines, miracles take place through the intercession of the Mother of God.

The present Gothic cathedral of Notre-Dame in Bruges was built in 1225, and is famous for its 400 foot tall brick tower. Inside, however, is where the real treasures are kept. Among those relics already mentioned, there is also a Madonna of Bruges, a marble sculpture of the Blessed Virgin and the Divine Child sculpted by Michelangelo.

The features of the Blessed Virgin depicted in the Madonna of Bruges are very similar in appearance to the famous Pieta, which Michelangelo was said to have completed just prior to this sculpture. It is the only one of his works that left Italy during Michelangelo’s lifetime, and was purchased and brought to Bruges by a wealthy merchant.

In 1794 the inhabitants of Bruges were forced by the French Revolutionaries to ship the Madonna of Bruges to Paris. It was fortunate that the statue was not destroyed, as so many Catholic works of art were during the French Revolution. The statue did not remain long in Paris, as it was returned to Bruges after the defeat of Emperor Napoleon. It was taken again in 1944 when the German’s retreated from Belgium, but it was discovered two years later in Germany and returned once again to Bruges.

As a precaution, after a bomb was set before the statue of the Pieta in Saint Peter’s Basilica in 1972, the Madonna of Bruges was placed behind bulletproof glass, so that the public can now only admire the sculpture from several feet away.

*from The Woman in Orbit and James Fitzhenry, roman-catholic-saints.com, Marian Calendar