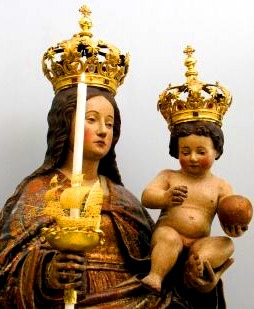 The shrine of Our Lady of Bonaria (Good Air) dates back to the latter years of the fourteenth century, at Cagliari, on the island of Sardinai.

According to tradition, on March 25, 1370, a ship ran into a terrific storm at a spot some miles off the coast of Sardinia while enroute from Spain to Italy. Soon the ship seemed in imminent danger of sinking, and the sailors in a last desperate effort to save her, began to get rid of the cargo.

When they heaved a certain large packing case into the sea, the waves immediately died down and the sea became calm. The sailors knew the ship had been miraculously saved and attempted to regain the last crate, followed it for some time. Unable to retrieve it, the sailors returned to their original course. The case floated away, and pushed by the tides, eventually landed on the shore of Sardinai at the foot of a hill called Bonaria.

A large crowd ran down to the beach when the crate washed ashore, eager to see what it contained. Some tried to open it, though no one was able to pry off the lid. Others tried to carry it from the waves, but could not do so, for the crate was too heavy. One of the children suddenly cried out: “Call for the Mercedarian Friars!”

The Mercy Fathers came and raised the heavy crate without any difficulty, and took it to their church, where it was opened in the presence of a large group of people. To the surprise of all, they found it contained a beautiful statue of the Virgin and Child. In her right hand the Virgin held a candle which was still lit!

Thus, a prophesy was fulfilled – the church had been build around 1330 by Father Carlo Catalan, while he was the ambassador to the Argonese Court. At the dedication he told the monks, “A Great Lady will come to live in this place. After her coming, the malaria infecting this area will disappear and her image will be called the Virgin of Bonaria.”

So when the statue floated in from the sea, and the Fathers placed it in their church, remembering what Father Carlo had said, they named it “Our Lady of Good Air,” or “Our Lady of Bonaria.” Due to the miracle, devotion to the Virgin spread quickly, especially among sailors who took the Blessed Virgin for their protector and carried her devotion far and wide.