Our Lady of Bavaria 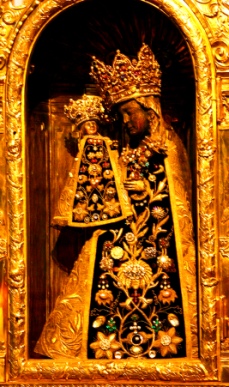 What is perhaps the most famous miracle occurred in the year 1489. A young boy had drowned, and his mother, full of faith, brought his body to lay at the feet of the image of the Mother of God, seeking a miracle. She was not disappointed, as her son was restored to life before many witnesses. From that time on, the chapel became a popular place of pilgrimage.

A Benedictine monastery was founded there in 1330 by the Emperor Ludwig IV, who established a community of twelve knights with their families to guard the place. However, it is the Capuchin friars who have served the shrine now for centuries, among them Brother Conrad of Parzham, who acted as porter for over forty years.

Our Lady of Bavaria

The emperor Ludwig gave a small statue of the Mother of God to the shrine that had been carved in Italy; and the place was soon famous both for its shrine of Mary and the learning of the monks. In 1744 the medieval church was burnt down, its successor being built and decorated in the German baroque manner. The chapel has an unusual octagonal shape, and it is thought to be the oldest Marian shrine in Germany. The other buildings had been remodeled mostly as they appear today.

A century later the abbey was suppressed, with other Bavarian religious houses; but it was restored in 1904, and Our Lady is still a resort of pilgrims. This great sanctuary has a truly magnificent mountain setting.

Pope John Paul II visited the shrine in 1980, and Pope Benedict XVI went there in 2006, leaving the Episcopal ring he had worn while the Archbishop of Munich.

*Our Lady of Bavaria from The Woman in Orbit and other sources, roman-catholic-saints.com, Marian Calendar

Our Lady led me to Altoetting !

The Holy Spirit works in very mysterious ways. I graduated from university with a Masters degree in engineering. Got my first job. Bought my first house, and for the first time I owned my own television. So, one morning I switched on the TV to watch breakfast news before going to work. Somehow the pomp and pageantry of the procession of Our Lady of Loretto (Italy) came on. I took it as a beckon from Our Lady to take a pilgrimage to Loretto (also visited by Saint Therese the Little Flower and Pope St. John the 23rd).

Met Herman-the-German on my flight to Italy. Herman invited me to stay with his family in Bad Wiessee (south of Munich) the following Christmas. I did. Being both Catholics he showed me the town of Altoetting, and told me the whole historical story, which I never knew before. I prayed for 1 hour at the shrine.

That Christmas, at night, Altoetting was absolutely beautiful. It was like a movie set of a Christmas story, but it was REAL. I can never forget it.

I keep telling this extraordinary chain of events to my family and friends. They never failed to show amazement. (Incidentally, my German friends from Berlin have not heard of Altoetting. I must educate them).

Psalms 126:3 is very appropriate in summing up my experience. "The LORD has done great things for us; Oh, how happy we were!".

Our Lady led me to Altoetting ! Not rated yet
The Holy Spirit works in very mysterious ways. I graduated from university with a Masters degree in engineering. Got my first job. Bought my first house, …