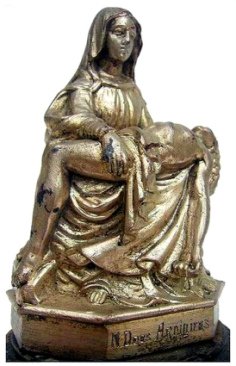 Our Lady of Ardilliers, located at Saumur, in Anjou, France. Its name is illustrious throughout France, as well on account of the concourse of people who were attracted thither, as from a fountain which cured several maladies. This image represents Our Lady of Pity, who holds in her arms her Son dead, whose head is supported by an angel.

Notre Dame Ardilliers has a statue, a fountain, and a church dedicated to Our Lady at Saumur in Anjou, France. The fountain was said to have been used in ancient times for pagan sacrifices. Crowds of people are attracted to the shrine, and its name is illustrious throughout that country, for there Our Lady cures many maladies for her devotees. The image represents Mary in pity holding in her arms her Divine Son, lifeless, His head supported by an angel. It is sometimes called Our Lady of Pity.

The monastery founded by Charlemagne at Saumur, was destroyed by the Normans and the single surviving monk retired to a cave near the spring of Ardilliers, a statue of Our Lady being his sole remaining treasure. A small statue near the spring, found in 1454, is believed to be the identical one just mentioned. The miracle wrought in connection with this image caused the erection of a small arch above the spring. The waters were found to have healing powers.

In 1553 a chapel was built and dedicated. It attained magnificent proportions as successive additions were made, notably by Cardinal Richelieu. Devotion to Our Lady became widespread as many miracles occurred.

Mary’s clients at Ardilliers number such illustrious persons as Louis XII, Anne of Austria, Marie de Medici, Henrietta of England, Cardinal Richelieu and others. The Founders of the Sulpician Company went there for inspiration; Saint Gignon de Montfort begged blessings and Mary’s help on the Institute of the Fathers of the Holy Ghost and the Daughters of Wisdom he was about to found.

Cities placed themselves under the protection of Notre Dame des Ardilliers, or Our Lady of Ardilliers, and promised annual pilgrimages. During the Revolution the church and shrine were despoiled of their treasures but not destroyed, and the image was left unharmed. In 1849 the ravages of time necessitated the renovation of the chapel, which had been built by Richelieu, and pilgrimages became more frequent than ever.

Return to Marian Calendar December from Our Lady of Ardilliers

Return to Titles of Mary from Our Lady of Ardilliers