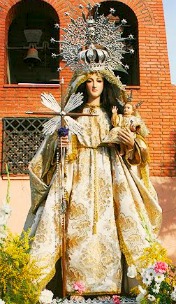 The Abbot Orsini wrote: “Our Lady of Apparitions, at Madrid, so called because, in the year 1449, the Blessed Virgin appeared during eight following days to a young woman named Yves, and ordered her to build a church in her honor, on the spot where she should find a cross planted to Our Lady.”

Cubas de la Sagra is a municipality in Spain in the province and autonomous community of Madrid. The approved apparitions of Our Lady in 1449 that occurred there are now almost inexplicably unknown, barely mentioned in passing, or treated as a legend in some books if even recognized as a point on some ancient map. It is true that the hosts of Napoleon looted and destroyed the sanctuary and monastery built there, and that the war in 1936 did not leave one stone upon another, but the memory of what happened there in 1449 must not be forgotten, at least by Catholics.

In the year 1449, Cubas was only a village with a simple church dedicated to Saint Andrew. The population of Cubas, however, lived quite forgetful of their duties to God, and their sins were so many that it seemed even to them that the hand of God must be hovering over the land, ready to punish them.

The Chronicles speak then of a young girl of 12 named Ines, (sometimes Yves or Agnes) who was but of humble birth. Still, there was something about her that made her different from other girls her age. She fasted, confessed regularly, and prayed daily the 15 mysteries of the Rosary. Perhaps her deep faith and religiosity may explain what happened next.

On Monday, March 3rd, 1449, Ines was tending pigs on the outskirts of town in a place called Cecilia, when at noon a woman appeared, a lady bright and beautiful dressed in cloth of gold. She was surrounded by light, and asked Ines what she was doing there. Ines stated that she was tending the pigs. The Lady then said that the people were no longer keeping the fasts, and told Ines the necessity of fasting. The lady said that the people of Cubas must change their ways, confess, and cease their debauchery and offenses against God, or He would soon punish them. There would be a great pestilence that would come upon them from which many would die. Perhaps knowing the hardheartedness of the people, Ines asked if she, too, or her mother and father, would die of this pestilence. She was told only that it would be as God desired. The lady then disappeared.

At first Ines did not tell anyone of the incident, for she thought no one would believe what had happened.

On Tuesday, March 4th, Ines was again tending the pigs, this time near the stream of Torrejon. At about the same time of day, at noon, just as the day before, the Lady reappeared. She asked Ines if she had told the people what she had been told to say, but Ines answered that she dared not to, for she suspected that she would not be believed. The Lady then commanded Ines to warn the people, and that if they did not believe, she would give her a sign. Ines asked the Lady who she was, but she said she would not tell yet before once again disappearing. Finally Ines decided to tell her father, Alfonso Martinez, who did not give any importance to the events recounted by his daughter, but thought it a children’s story, a story invented in the imagination of a young girl. He told Ines to be quiet when she tried to tell anyone about the warning.

On Friday, March 7th, Ines was keeping the pigs in New Prado, when the Lady reappeared again as before. She asked Ines if she had told what she had been commanded to say. Ines answered that she had told her mother and father, and many others. The Lady told Ines to publish what she had said to all the people without any fear or trepidation.

When Ines went home at the end of the day she told her parents what had happened. Her father told her she was lying and to “shut up,” but her mother encouraged Ines, saying, “Well, still, say it.”

By Sunday, March 9th, word had spread. A priest, Juan Gonzalez, with some other men, when to Ines’ home and talked to her parents. Afterwards, the priest went to say Mass. Ines went out with the pigs, accompanied by her brother John, to a place called The Ciroleda. Ines’ father left them and went to Mass. The Ciroleda was a watery meadow that the pigs liked. Ines left her brother after a time looking for one of the pigs that had slipped away, and soon lost sight of her brother. All by herself, she knelt on the soft earth, asking the lady to return, even though she was afraid.

The Lady appeared again as before, telling Ines to rise. “Lady, who are you?” Ines asked. “I am the Virgin Mary,” the lady answered, and approaching Ines, took her right hand and squeezed her fingers and thumb together, making some kind of a sign. She then told Ines to go to the church and show the sign to the people as they left Mass. Ines told her brother to watch after the pigs, and went to the church, arriving just as Mass was letting out. She was crying, and went to kneel before the altar of Mary. There, she told everyone what had happened.

I cannot decipher what the sign was in Ines’ hand, but whatever it was, the people examined her hand and many believed. The following day the priest led the notables of the town and the faithful in a procession to the place of the last apparitions, carrying a wooden cross. When they arrived, Ines walked forward alone with the cross. The Virgin Mary herself took the cross, telling Ines to have a church built there in her honor.

The cross was permanently placed where the Virgin, Our Lady of Apparitions, had been last seen, and many miracles occurred there, including 11 people who were brought back to life. A church was begun shortly after the apparitions of the Virgin were approved. It stood for nearly five centuries, when it was destroyed in the 1936 fire, caused during the Civil War. Many of the nuns were martyred. In 1949 the reconstruction was completed in part by the Regiones Devastadas, who placed the current cross in the same place where the first had been.

According to tradition, Ines ended her life in the monastery of Santa Maria de la Cruz after having children and being widowed. It is said that anyone who goes to visit the place, with faith, receives special graces, and that miracles still occur there.