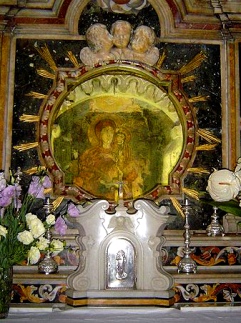 The Abbot Orsini relates: “Tradition has it that one night a woman in great brightness appeared to a watchman on duty where a new church was being built in Rossano, Italy. She asked him to withdraw from the place. The next morning there was seen in the building a picture of the Blessed Virgin, painted, but not by the hand of man. For that reason it came to be called “Acheropita,” not made by human hands.

The latest historical research has established that the image of Acheropita – a fresco on a pillar – was found in a small chapel near the cave of one of the many hermits who formed the aura of Saint Nicholas of Vallone in the 6th century.

It seems a holy hermit named Ephrem was very devoted to the Blessed Virgin Mary. In the year 580, a certain Captain Mauricio, was deflected from his course by the winds and landed near present day Rossano. The hermit Ephrem went to meet him with the strange sounding greeting of:

“It was not the winds that brought you here, but Our Lady, for once you are appointed emperor, you will build a church here.”

A mere two year later, in the year 582, Mauritius was crowned emperor, and remembering the prophesy, had artists brought to the cave to paint a fitting image of the Blessed Virgin Mary. Although the artists toiled all day, during the night their work always mysteriously disappeared. The governor, unsure of what was happening, ordered that the cave be guarded at night.

That night as the guards went about their duty in front of the cave, a young woman of rare beauty came out of nowhere amidst a bright light wearing a white silk cape. She asked the guard to depart from the site, which they did. Informed the next morning of what had happened, the governor went to the church. To everyone’s surprise he observed an image that perplexed him, for painted on the bottom of the inner wall was a beautiful picture of Our Lady, similar to the Byzantine icons he had seen before. It was exactly where his artists had been trying in vain to draw the image.

The news of the miracle soon spread throughout the city. The faithful began arriving to the place, shouting in wonder and cheering in tears with songs of praise, “Acheropita! Acheropita!”

The image became an object of veneration for the people of Rossano, and a new church had to be built to satisfy popular piety in a more worthy manner. That church is now known as the Rossano Cathedral, and it was built next to the grotto where the image is still preserved. It is also said that later the Saracens attacked, trying to surprise the city of Rossano, but they were repulsed by Our Lady, who appeared dressed in purple, and holding in her hand a lighted torch. The sight of her majesty terrified the Saracens, who turned and fled.

On May 26, 1949, the diocesan cathedral was erected at the shrine. From August 16 to October 16, 1949, a silver statue of Our Lady was carried on a triumphal pilgrimage through the archdiocese. August 15th is the annual date for the celebration of the Madonna Acheropita, and it is said that during the celebration a wonderful atmosphere envelops the whole of the city for the occasion, with the festival offering an opportunity for the faithful to demonstrate their love for the Blessed Virgin.

On June 18, 1950, Cardinal Micara crowned the image of the Blessed Virgin.

Prayer of Our Lady Acheropita:

Blessed Virgin, Mother of God and our Mother -
Acheropita,
Turn your gaze upon ourselves and our families.

Throughout the centuries, your miracles and apparitions,
Have shown you are always the Mediatrix.

Have compassion upon us and relieve the difficulties
in which we currently find ourselves
and mitigate the sadness and bitterness of our lives.

Thou, crowned Queen, at the right hand of your Son,
Full of immortal glory, you can assist us in our need.

May all that is in us and around us,
Receive your maternal blessing.
Queen Acheropita!

Oh! Let us dedicate our whole lives to you
and give honor to you for your service to our brothers.

We request your maternal goodness
and the grace that we may live under your constant protection,
comforted in our trials and freed from these present troubles.

With confidence we can repeat,
That none turn to thee in vain that have called upon you
with the title “Acheropita.”