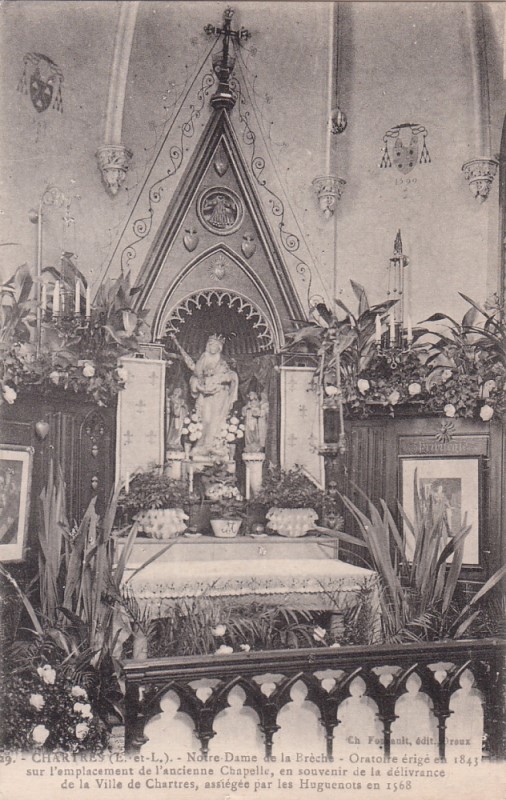 The Abbot Orsini wrote: “Our Lady de la Breche, at Chartres, where a procession takes place every year, in thanksgiving for Our Lady’s having delivered the city, when besieged by heretics, in the year 1568. It was during this siege that the image of Our Lady, placed upon the Drouaise gate, could not be injured by the cannon and musket balls, which the besiegers fired at it, and the marks of which are still seen at two or three inches from the image.”

“I shall place enmity between thee and the Woman. She shall crush thy head…” is indeed verified at the shrine of la Breche.

The procession mentioned by the good abbot was a custom that took place annually in commemoration of the miracle until the time of the French Revolution. The mayor, or on occasion some other important personage who happened to be the guest of the town at the time, traditionally lit the first candle before the shrine of the Blessed Virgin Mary, Our Lady de la Breche. Thereafter the procession began, winding its way from the Cathedral down the steep curves of the Rue Muret towards the Porte Drouaise. Those who took part could read the inscription engraved on the ramparts which recorded the events of the siege in Latin for the instruction and example of posterity.

Pursuing their way up the Rue de la Breche, the procession would next arrive at the Chapel of Notre-Dame-de-la-Breche. Inside there was a statue of the Blessed Virgin which stood on the keystone of the old chapel that was erected in 1599 in memory of this event, and near the site of the famous breach.

About the altar are there were numerous cannon-balls of stone which were relics of the siege. Entering the large annex on the right the visitor would see a still more curious relic of the siege – the fourteenth or fifteenth-century statue of Notre-Dame-de-la-Breche, whose name was graven on the keystone above mentioned. And if he should inquire how that name was earned, he would be told that this was the very statue which had been set over the Porte Drouaise and, by a miraculous intervention, had saved the town.

The contemporary chronicler Duparc informs us that for all that the men of the Huguenot army were esteemed the greatest soldiers in Europe, yet were they miraculously blinded by a manifest miracle. And the miracle was on this wise. The defenders of Chartres placed above the gate of Drouaise the statue of Our Lady de la Breche against which the enemy fired many shots from cannon and arquebus alike, but without being able to ever hit it. And to demonstrate how many shots were fired at the gate on which was the said image, the bridge of that gate was broken and cut in two by the cannon-balls, and all round the image up to a few inches of it the marks of many bullets may still be seen. Through it all the statue remained whole and intact; in spite of the efforts of the enemy to destroy that image, for it was never struck by a single shot.

I know well, Duparc adds, that the heretics and some others will scoff at this, but Herod also mocked at Christ when he beheld Him.

There is another, even more wonderful story told by historians that as the Huguenots approached a breach in the walls they had made on March 9th, a "grand lady" stood before them, carrying a child in her arms. Rather than trying to avoid the woman and child, they turned their guns directly on her. Having decided to attack her with murderous intent, they became enraged to see that although they fired dozens of rounds they seemed to be missing their target, for the woman and child remained before them standing silently in the breach. Screaming foul threats, the Huguenots fired, reloaded, and fired again, but the woman seemed to be catching their bullets and collecting them in her apron.

The Catholics recognized that it was the Mother of God herself, holding Our Lord in her arms, and that they had personally taken up the defense of the city. The enemy raged and fired at them with no effect. Encouraged to see what they could never have even dared to hope for, the ecclesiastics and women began to pray anew as the men picked up their weapons and returned to the fight, vigorously repelling the invaders. 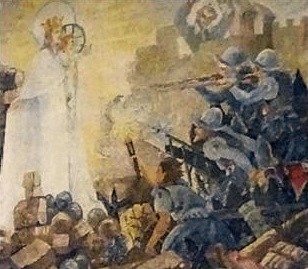 The Huguenots were forced to retreat full of spite and confusion, for they had counted on looting the city and the Church, whose treasury was one of the richest in Christendom. The Prince of Conde had sold in advance much of the treasure he expected to plunder from the cathedral, to which the Canon Souchet said he would never deliver what he had promised, for the glorious Virgin defended the city, which she recognized as her own, against the hate of those heretical fanatics who showed such malice for her son.

The chapel mentioned above was destroyed during the French Revolution. The first stone of the new chapel was laid by M. Lecomte, general Vicar, on April 7, 1843.

*from The Woman in Orbit and James Fitzhenry, roman-catholic-saints.com, Marian Calendar