Our Lady of the Fountain
Life Giving Spring 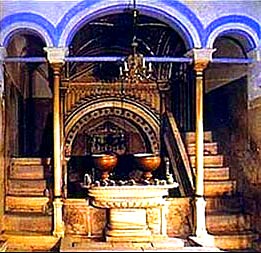 The Abbot Orsini wrote: “Our Lady of the Fountain, at Constantinople, built, by the Emperor Leo, in the year 460, in thanksgiving for the Blessed Virgin’s having appeared to him on the margin of a spring, to which he was charitably leading a blind man, when he was no more than a common soldier, and foretold to him that he would be emperor.”

Emperor Leo I, also known as Leo I the Thracian, Leo the Great, and even Leo the Butcher, was the emperor of the Byzantine Empire from the year 457 until 474. Leo had begun with a career in the military, eventually rising to the rank of tribune in 457. When the emperor then reigning died, Leo was acclaimed the new emperor. It is interesting to note that he is a saint in the Orthodox Church.

In a certain manner, the shrine of Our Lady of the Fountain still exists. Instead of the title the abbot had given it, the shrine is now known as the Mother of God of the Life-Giving Spring, and the story surrounding it is as follows.

Our Lady of the Fountain
Life Giving Spring

According to the legend, the man who would later become Emperor Leo I of the Byzantine Empire was a good and pious man long before he became Emperor. One day in his travels he had come upon a blind man, who, being tormented with thirst, begged Leo to find water to quench his thirst. Feeling compassion for this man, Leo went in search of a source of water, but found none. As he was about to cease his search, he heard a voice telling him: “Leo, you do not need to tire yourself for there is water nearby.”

Leo looked again, but still found no water. Then he heard the voice again, this time telling him:

“Emperor Leo, enter into the deepest part of the woods and you will find a lake; draw some cloudy water from it with your hands and give it to the blind man to quench his thirst, then anoint his darkened eyes with the clay and you will immediately know who I am, for I have dwelt in this place for a long time. Build a church here that all who come here will find answers to their petitions.”

Leo found the lake, and did as he was instructed. As soon as the blind man’s eyes were anointed, he received his sight. Leo became emperor a short time later, and then built a large and beautiful church in honor of the Blessed Virgin at that place just outside the Golden Gate near the Seven Towers district. Many miracles began to occur there, including resurrections from the dead, through the intercession of the Mother of God. When this church was damaged by earthquakes, it was rebuilt by subsequent emperors who also experienced miraculous healings.

The church was razed to the ground when Constantinople fell to the Turks in the year 1453. The material that remained was taken to be used to construct the mosque of the Sultan Beyazid. Even then people continued to come to the place seeking relief, for the spring remained intact beneath the ruins. The shrine had twenty-five steps going down to it, and a window in the roof above from which it received a little light.

In 1821 the shrine was destroyed during the Greek War of Independence. In 1833 the Sultan Mahmud allowed the Orthodox Christians to rebuild the shrine. Later, on the night of September 6, 1955, the Turks killed the abbot, who was hung, and the shrine desecrated and burned to the ground. The shrine has since been restored yet again, but appears nothing like it once had in the distant past. Still, it is said that the water from the spring continues to have healing properties.