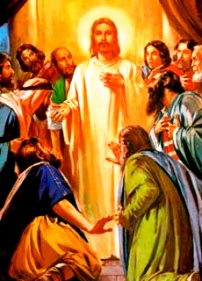 April 3: Apparition of Our Lord to Our Lady & the Apostles in the supper room, eight days after his resurrection.

“When Thomas had left and the doors had been locked, the Lord entered and appeared to the others. In their midst He saluted them, saying: “Peace be with you. It is I; do not fear.”

“At this sudden apparition, the Apostles feared lest what they saw was a ghost or phantasm, and the Lord added:

“Why are you troubled, and why do thoughts arise in your hearts? See my hands and feet, that it is I Myself; handle and see: for a spirit hath no flesh and bones, as you see Me have.”

The Apostles were so excited and confused, that though they saw Him and touched the wounded hands of the Savior, they could not realize, that it was He to whom they spoke and whom they touched. The loving Master in order to assure them still more, said to them:

Joyfully they offered Him some fried fish and a comb of honey. He ate part of these, and divided the rest among them, saying:

“Do you not know, that all that has happened with Me is the same that has been written by Moses and the Prophets, in the Psalms and holy Scriptures, and that all must necessarily be fulfilled in Me as it was prophesied?”

And at these words He opened their minds, and they knew Him, and understood the sayings of the Scriptures concerning His Passion, Death, and Resurrection on the third day. Having thus instructed them, He said again:

“Peace be with you. As the Father has sent me, so I send you, in order that you may teach the world the knowledge of the truth of God and of eternal life, preaching repentance of sins and forgiveness of them in my name.”

Breathing upon them, He added and said:

“Receive ye the Holy Ghost, in order that the sins which you forgive may be forgiven, and those which you do not forgive, may not be forgiven. Preach ye to all nations beginning in Jerusalem.”

Then the Savior, having thus consoled and confirmed them in faith, and having given them and all priests the power to forgive sins, disappeared from their midst.”