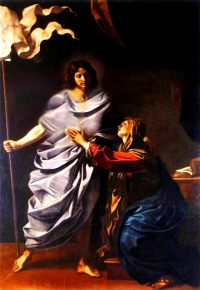 March 27: Apparition of Our Lord to Our Lady, as soon as He was risen from the dead.

“Christ our Savior, arisen and glorious, in the company of all the Saints and Patriarchs, made His appearance. The ever humble Queen prostrated herself upon the ground and adored her divine Son; and the Lord raised Her up and drew Her to Himself. In this contact, which was more intimate than the contact with the humanity and the wounds of the Savior sought by Magdalen, the virgin Mother participated in an extraordinary favor, which She alone, as exempt from sin, could merit.”

“This favor was, that the glorious body of the Son so closely united itself to that of His purest Mother, that He penetrated into it or she into His, as when, for instance, a crystal globe takes up within itself the light of the sun and is saturated with the splendor and beauty of its light. In the same way the body of the most holy Mary entered into that of her divine Son by this heavenly embrace; it was, as it were, the portal of her intimate knowledge concerning the glory of the most holy soul and body of her Lord.”

“As a consequence of these favors, constituting higher and higher degrees of ineffable gifts, the spirit of the Virgin Mother rose to the knowledge of the most hidden sacraments. In the midst of them she heard a voice saying to Her: “My beloved, ascend higher?”

“By the power of these words she was entirely transformed and saw the Divinity clearly and intuitively, wherein she found complete, though only temporary, rest and reward for all her sorrows and labors. Silence alone here is proper, since reason and language are entirely inadequate to comprehend or express what passed in the Blessed Mary during this beatific vision, the highest she had until they enjoyed. Let us celebrate this day in wonder and praise, with congratulations and loving and humble thanks for what she then merited for us, and for her exaltation and joy.”