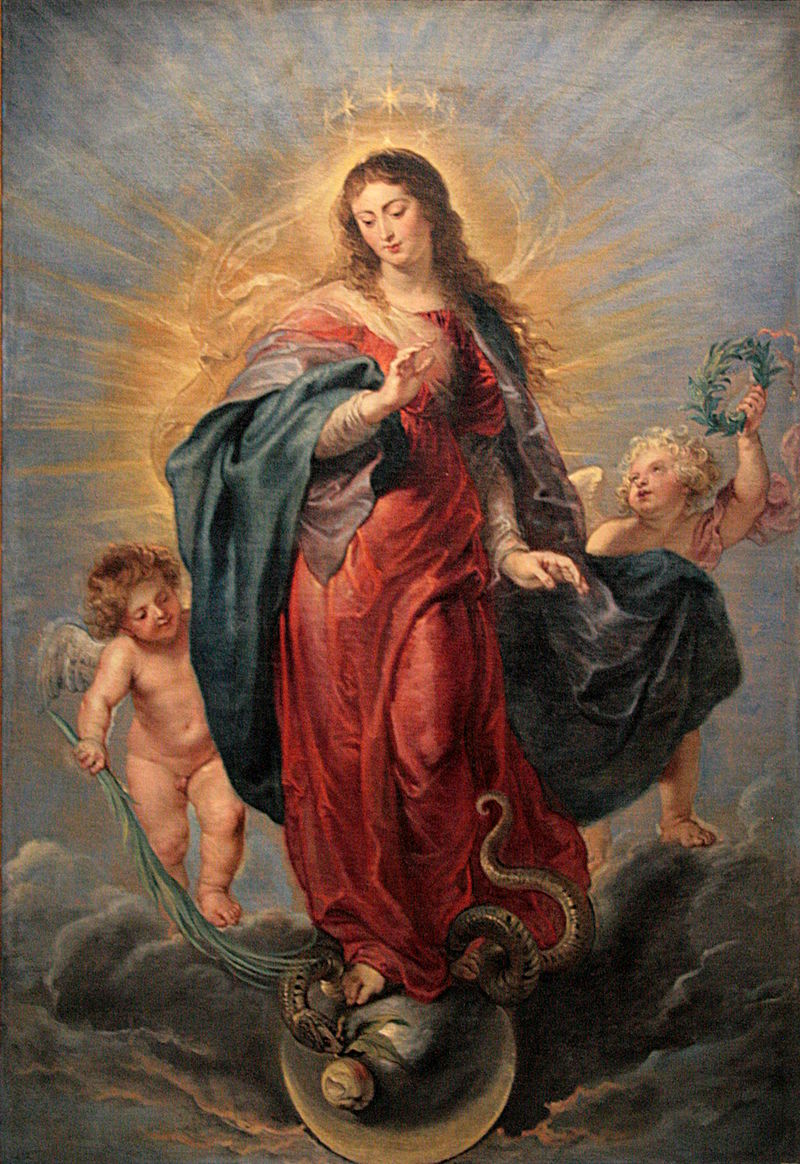 December 8: The Immaculate Conception of the Blessed Virgin Mary

This festival began in the East, more than nine hundred years ago, since mention is made of it by Saint John Damascen, who lived n 721. It was instituted in England in the year 1100 by Saint Anselm, Archbishop of Canterbury; afterwards in the diocese of Lyons in the year 1145; and final, Pope SixtusIV commanded, in the year 1576, the celebration of it throughout Christendom.

At the very first moment of conception in the womb of Saint Ann, Mary’s soul was flooded with the fullness of grace: “all fair, all beautiful.” The laws of man and of nature did not apply to Mary. Her soul was flooded with light so that she could make her acceptance of the Mystical Marriage with her God.

“You have ravished my heart, my sister, my spouse, you have wounded my heart…My sister, my Birde is a garden enclosed, a fountain sealed up…Thou art beautiful, O my Love, sweet and comely; terrible as an army set in array…One is my Dove; My perfect one is but one; she is the holy one of her mother, the chosen of her that bore her. How beautiful art thou, by dearest delights!...Put me as a seal upon they heart, as a seal upon thy arm, for love is strong as death…” – thus God speaks to her in the “Canticle of Canticles,” and Mary replies:

Mary’s Suscipe – the most perfect act of surrender a creature ever made, an oblation which would have a permanent re-echo every moment of her life, her bridal consecration, her mystical union with God was spoken at the very first moment of her being. Fiat – Be is done to me…

There was never a questioning of God’s will in the life of Mary; but it was always perfect acceptance of whatever He planned and wanted of her. Therein lies Sanctity – doing God’s will, not ours, regardless. Yes, even the Motherhood of Mary as the “Mater Dei” depended on this, for Christ in the Gospels says:

You, who love the Blessed Mother so intimately should certainly desire with all your heart to imitate Mary’s fiat in every instance of life. Strive for this initial complete consecration to the Will of God in everything, regardless. At the root, foundation of every life lived for God, there must be a “Suscipe” “Take O Lord, and receive all my liberty, my will…” and a Fiat in deepest love and conformity to God’s Holy Will. In return God will favor you with peace, joy of service, but, also, as He did His own dear Mother, with Suffering; but, always, He will give you the grace to say with Mary, “Behold the Handmaid of the Lord, be it done unto me according to Thy Will.”

Mary is “our tainted nature’s solitary boast, and we are her children. Should not a daughter try to resemble her Mother in everything? Mary is the Treasure-house of God’s graces; she will give whatever we ask of her.

“Holy Mary, Mother of God, Immaculate One, make me holy.”

The origin of the feast can be traced back at least as far as the fifth century (406) when it was celebrated on December 8. Not until three centuries later was it celebrated in the Latin Church. Official recognition was given it in England in 1047, when Anselm, the bishop of Canterbury, ordered its celebration in his diocese. Various records of the time show it had official as well as individual recognition, for in the pontifical of Canterbury and two calendars belonging to the abbeys of Old Minster and New Minster in Winchester, definite mention of the feast is made.

In 1476 Pope Sixtus IV ordered its celebration throughout the Church. An office was then composed for it. Clement VIII raised it to a feast of the second class; Clement IX added an octave, and finally, on December 6, 1708, Clement XI decreed it a universal holy day of obligation. Many indulgences were added to it by Pius V, and on December 8, 1854, at a Council in Rome, Pius IX  declared it one of the articles of faith of the Holy Catholic Church. Wishing to pay still greater honor to Mary, Leo XIII, in 1879, raised the feast to a double of the first class with a vigil, a dignity which had already been granted to Sicily, Spain, and the United States. The Immaculate Conception was declared patron of all the Spanish possessions, including those in America, in 1760, and in 1847 she was made patron of the United States.

The history of the United States has been closely associated with Mary Immaculate, and the history of its development abounds in references to Mary.

The early Spanish explores came with the banner of Mary; the very ship of Columbus gave up its profane appellation for that of St. Mary; the earliest shrines were reared under her invocation; bay, and river, and mountain received the hallowed name; the first city on the mainland that became a bishop's see was St. Mary's. If the ardent sons of France chose the icy realm of Canada to plant the "fleurs-de-lis," its rigors could not chill devotion to Mary; Cartier, in his distress, turns to Mary, and vows a pilgrimage to her shrine; and Montreal Island sees a city rise with the name of Ville Marie; while, westward as her pioneers and missionaries go, St. Mary marks her path, till the great Mississippi, the River of the Immaculate Conception, bears them down again towards those Spanish realms where every officer swore to defend the Immaculate Conception.

The Immaculate Conception was one of the most popular subjects of the Italian and Spanish painters of the seventeenth century. Indeed, when the Academy of painting was founded in Seville in 1660, every candidate for admission had to declare his orthodox belief in "the most pure Conception of Our Lady."

The Conception was a favorite subject for may of the famous painters -- Murillo, Holbein, Falco, Muller, and Signorelli. Murillo alone painted twenty-five pictures of the Conception, of which no two are alike, and he is considered the best painter of the Virgin under that title.

Neither is it surprising that the Spanish painters possessed such a deep love for Mary Immaculate. Spain itself was noted for a special veneration for the Immaculate Conception; even in the national salute, this devotion was expressed. "Ave Maria purissima," (Hail Mary most pure), the Spaniard greeted a friend, and "Sin pecado concebida" (Conceived without sin), the friend replied.

Return to Marian Calendar December from The Immaculate Conception