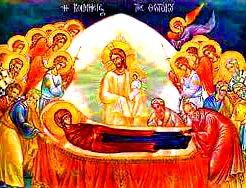 Death of Our Lady in the presence of the apostles, except Saint Thomas. Like her divine Son, she rose again and ascended to heaven on the third day after her death. The Dormition of Our Lady.

“The holy Apostles held a conference concerning the burial of the most sacred body of their Queen and Lady. As they remembered that, according to the custom of the Jews at burial, the deified body of their Master had been anointed with precious ointments and spices and wrapped in the sacred burial cloths; they thought not of doing otherwise with the virginal body of His most holy Mother. Accordingly they called the two maidens, who had assisted the Queen during her life and who had been designated as the heiresses of her tunics, and instructed them to anoint the body of the Mother of God with highest reverence and modesty and wrap it in the winding-sheets before it should be placed in the casket.

With great reverence and fear the two maidens entered the room, where the body of the blessed Lady lay upon its couch; but the refulgence issuing from it barred and blinded them in such a manner that they could neither see nor touch the body, nor even ascertain in what particular place it rested.

In fear and reverence still greater than on their entrance, the maidens left the room; and in great excitement and wonder they told the Apostles what had happened. They, not without divine inspiration, came to the conclusion, that this Ark of the covenant was not to be touched or handled in the common way. Then saint Peter and saint John entered the oratory and perceived the effulgence, and at the same time they heard the celestial music of the angels, who were singing: “Hail Mary, full of grace, the Lord is with thee.” Others responded: “A Virgin before childbirth, in childbirth and after childbirth.” From that time on many of the faithful expressed their devotion toward the most blessed Mary in these words of praise; and from them they were handed down to be repeated by us with the approbation of the holy Church.

The two holy Apostles, saint Peter and saint John, were for a time lost in admiration at what they saw and heard of their Queen; and in order to decide what to do, they sank on their knees, beseeching the Lord to make it known. Then they heard a voice saying: “Let not the sacred body be either uncovered or touched.”

Having thus been informed of the will of God, they brought a bier, and, the effulgence having diminished somewhat, they approached the couch and with their own hands reverently took hold of the tunic at the two ends. Thus, without changing its posture, they raised the sacred and virginal Treasure and placed it on the bier in the same position as it had occupied on the couch. They could easily do this, because they felt no more weight than that of the tunic. On this bier the former effulgence of the body moderated still more, and all of them, by disposition of the Lord and for the consolation of all those present, could now perceive and study the beauty of that virginal countenance and of her hands. As for the rest, the omnipotence of God protected this his heavenly dwelling, so that neither in life nor in death any one should behold any other part except what is common in ordinary conversation, namely, her most inspiring countenance, by which She had been known, and her hands, by which She had labored.

Then the Apostles consulted further about her burial. Their decision becoming known among the multitudes of the faithful in Jerusalem, they brought many candles to be lighted at the bier, and it happened that all the lights burned through that day and the two following days without any of the candles being consumed or wasted in any shape or manner.

The Apostles took upon their shoulders the sacred body and the tabernacle of God and, as priests of the evangelical law, bore the Propitiatory of the divine oracles and blessings in orderly procession from the Cenacle in the city to the valley of Josaphat. This was the visible accompaniment of the dwellers of Jerusalem. But besides this there was another invisible multitude, that of the courtiers of heaven. It was composed of the thousand angels of the Queen, continuing their celestial songs, which were heard by the Apostles and disciples and many others, and which sweetly continued for three days. In addition to these many other spirits had descended from heaven, namely, many thousands or legions of angels with the ancient Patriarchs and Prophets, among whom were saint Joachim, saint Anne, saint Joseph, saint Elizabeth and the Baptist and numerous other saints, who were sent by our Savior Jesus to assist at the exequies and burial of His most blessed Mother.

When the procession came to the holy sepulcher in the valley of Josaphat, the same two Apostles, saint Peter and saint John, who had laid the celestial Treasure from the couch onto the bier, with joyful reverence placed it in the sepulcher and covered it with a linen cloth, the hands of the angels performing more of these last rites than the hands of the Apostles. They closed up the sepulcher with a large stone, according to custom at other burials. The celestial courtiers returned to heaven, while the thousand angels of the Queen continued their watch, guarding the sacred body and keeping up the music as at her burial. The concourse of the people lessened and the holy Apostles and disciples, dissolved in tender tears, returned to the Cenacle.

*from The City of God, Mary of Agreda