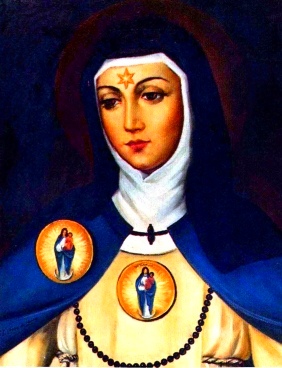 Institution of the Confraternity of the Immaculate conception, Toledo, Spain (1506)

Saint Beatrice of Silva was a Portuguese noblewoman and sister of the Franciscan friar, Blessed Amadeus. Her great beauty aroused the jealousy of the queen, her cousin, for which she was cast into prison. It was while she was in prison that the Blessed Virgin Mary appeared to her, telling her that she wanted her to found a new Order of nuns in her honor.

In 1484, Beatrice, with twelve companions, established themselves in a monastery in Toledo (now the Monastery of the Order of the Immaculate Conception) set apart for them by Queen Isabel, the Catholic. A few years earlier the Blessed Virgin had showed Saint Beatrice de Silva in a vision that she should wear a habit consisting of a white tunic and scapular with a light blue mantle. This was the origin of the Order of the Immaculate Conception, also known as the Conceptionist Poor Clare’s.

In 1489, by permission of Pope Innocent VIII, the nuns adopted the Cistercian Rule, bound themselves to the daily recitation of the Divine Office of the Immaculate Conception, and were placed under obedience to the Ordinary of the diocese. In 1501, Pope Alexander VI united this community with the Benedictine community of San Pedro de las Duenas, under the Rule of St. Clare, but in 1511 Julius II gave it a Rule of its own and put them under the protection of General Minister of Friars Minor, for this reason the nuns are called Franciscan Conceptionists. Special constitutions were drawn up for the Order in 1516 by Cardinal Francis Quiñones. It was the foundress, Beatrice of Silva, who chose the habit: white, with a white scapular and blue mantle.

A second monastery was founded in 1507 at Torrigo, from which, in turn, were established seven others. The congregation soon spread through Portugal, Spain, Italy, France; Spain's colony of New Spain (Mexico), starting in 1540 and as well as in Portugal's colony of Brazil.

The foundress, Mother Beatrice of Silva was canonized by Pope Paul VI in 1976. Her feast day is 17 August.

To read an excellent article on all the miracles surrounding this order by Marian T. Horvat, please click here.